Dirkschneider – Live – Back to the Roots (AFM Records) 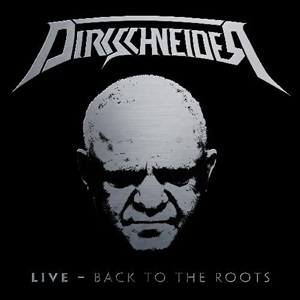 Since the original Accept is going strong with Mark Tornillo as the singer, Udo Dirkschneider feels now is the time to lay his own Accept legacy to rest and solely concentrate on his vast U.D.O. catalog. Live – Back to the Roots is a fitting ending to his Accept days – breaking out a 24 song setlist with his current U.D.O. bandmates making for a two hour plus history lesson on those early albums. Recorded on April 2, 2016 in Memmingen, Germany at Kaminwerk, the Teutonic roar and traditional anthems shine, proving that these songs, riffs, and melodies stand up well beyond their original 70’s and 80’s releases.

The crowd of course plays a large role in unison sing-a-longs throughout – how can you not get chills for the Restless and Wild duo of “Neon Knights” and “Princess of the Dawn”? The hits are all here – “Balls to the Wall”, “Midnight Mover”, “Fast as a Shark”, “London Leatherboys”, and “Breaker” among them – but ardent fans want to hear some of the deeper cuts too, which you’ll get with “Wrong Is Right”, “TV War”, and “Flash Rockin’ Man” for sure. Udo has one of the most unique voices in metal – rarely duplicated and still potent into his 60’s, ready to roar from an early Accept favorite like “I’m a Rebel” on through to “Monsterman” from the very underrated Russian Roulette record. Even if the members are different between the two bands, it’s great to hear younger musicians paying proper respect for a lot of the material that pre-dates their youth – guitarists Andrey Smirnov and Kasperi Heikkinen not veering too far off course in the riff and solo departments.

At this point we seem to be getting a live album/DVD set every other year from Udo in one form or another – if demand dictates, so be it. Live – Back to the Roots will be one for historical documentation purposes, as Dirkschneider plans to hit North America for a final run in early 2017. Strap on those army fatigues and get some synchronized headbanging ready, as this is old school traditional metal that warrants multi-generation appeal.