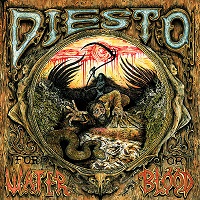 Portland, OR is a cool place right now; perhaps the Austin of the Northwest, just with their own basketball team. Diesto happen to be one of the city’s staple sludge metal acts, having been slugging it out for the better part of ten years with five albums to their name, the latest being For Water or Blood. Their bearded, lumbjack-ian appearance is the obvious tone-setter and tell-tale sign that For Water or Blood doesn’t fall far from the Mastodon or Baroness tree.  And naturally, it doesn’t.

As an instant note of praise/positivity/whatever, the band does concern themselves with writing actual songs, not meaningless, lumbering sojourns into the depths of distorted sludge. One can point right away to opener “Trail to the Sun,” which wraps its arms (burly ones, probably) around a melodic rock chorus and supple riffs that are mostly digestible. It’s when the band trudges down hoarse vocal/bland riff territory ala “Edge of the World,” the very Mastodon-like “Sirens” and plodding “Dirty River” that Diesto quickly loses their plot and becomes more of a signpost of the bands they like, instead of the band they are capable of becoming.

It’s an unfortunate consequence that there are a lot of bands like Diesto going at the present time, so it wouldn’t surprise DR in the slightest if For Water or Blood gets lost in the man-metal/flannel shuffle. Then again, there seems to be a lot of buzz brewing all the way up in Portland, meaning that somebody’s going to give a flying hoot about Diesto…probably far more than we do.