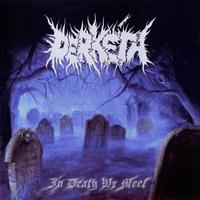 A wise gentleman told the teenage-era version of this scribe that “Pittsburgh fans don’t support Pittsburgh bands.” Then, it was a crushing realization that playing in a local band in the Steel City usually meant you’d be playing in front of 20 people a show. Such was the reality for many bands from Pittsburgh, several of whom were worth far more than crowd attendance. One of them is Derketa, best-known for being one of the first death/doom bands to be predominantly female. The band formed in 1988, split in 1991, and has been in various states of activity since, all the while accumulating a reputation that stretches far beyond the so-so visibility any group would receive in Pittsburgh.

Seeing as their lone In Death We Meet debut was so well-received upon its 2012 release, John McEntee and Ibex Moon are sending it back out there again. Remixed by Grave main dude Ola Lindgren, In Death We Meet bares plenty of 90s death/doom hallmarks, the most obvious being is that it sounds natural. So with riffs pulled from the earth’s depths, and the unearthly bellow of Sharon Bascovsky pulling plenty of weight, a good chunk of the album’s tunes are immensely heavy in the throwback sense. Sure, one could easily pinpoint where the ideas on “Shadows of the Past” or the Autopsy-funneled “Witchbound” came from, yet it’s the album’s adherence to classic death guidelines that makes it float. Plus, the band’s cover of Sepultura’s raucous “Troops of Doom” is a mighty winner.

The addition of the band’s Darkness Fades Life 7” (hence, the inclusion of “Troops of Doom”) gives the In Death We Meet reissue some additional pull. After all, Derketa did release the thing themselves three years ago, so with the backing of Ibex Moon, an updated, beefier mixing job, and, the aforementioned bonus jams, it’s a rational reissue, one that should give the band some nice momentum should they see fit to bust out album #2.