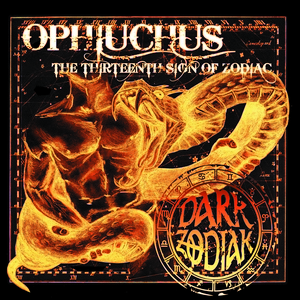 With a ten year history behind them at this point, Germany’s Dark Zodiak has released two previous full-length efforts to their name. Ophiuchus: The Thirteenth Sign of Zodiac is their third release, and sees the band going in full-steam-ahead mode with their vicious brand of death/thrash. Those in the mood for something frenetic and heavy are bound to get some kicks out of this one.

With no disrespect to it, Ophiuchus is a pretty straight forward record. It takes a mixture of death and thrash metal and simply runs with it. It doesn’t worry about going over the top in flashiness, but simply doubles down and gets right to the meat of things. There’s a bounty of thrashy riffs and driving melodies that are going to induce plenty of headbanging fits (the second half of “Total Freedom” stands out as one of the best examples here), the solos and leadwork is catchy enough to make you notice without being too tech-y, and the extreme vocals are quite varied and are quick to change things up. Because of all of this, there’s a level of polish that shines significantly with the band honing in on the important stuff for the genre and making sure it hits hard and efficiently. The energy persists for the entire release too, with closer “Ignorance” being an absolute punch in the face to go out on.

If you are in the market for some well-done death thrash that knows exactly how to check the boxes off and make them devilishly shine, Ophiuchus is tailor-made for you. It understands both the limits and requirements of the genre and uses them to their full potential, even if it doesn’t stray far from the beaten path. Solid material for your next headbanging session.