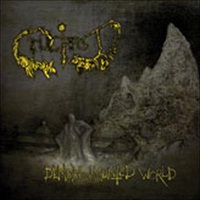 The fraction of the underground that enjoys sloppy death metal (read: Autopsy, Abcess, early Venom, et al) will no doubt fall prey to Crucifist. It’s loose and jagged, featuring Danny Lilker of Brutal Truth (who’s also been involved with 80 other projects) and Orodoruin. Demon Haunted World makes no allusions to what it is, succeeding in hitting that soft spot of classic old-school death metal.

Revival-based numbers like the punishing “Putrid Mother Lode,” “Honor” and excellent “Tumefaction” will no doubt rekindle the glory days of the above-mentioned bands. Production-wise, this thing is spot-on, with a heavy load of grit and grime to the guitars, along with Ron Blackwell’s frothy, near-decipherable vocal attack.

Like most things that seek to bring back the glory days of a sound, Demon Haunted World isn’t without its flaws (the riffing tends to lose its muscle toward the back end of the album) nor does it make one forget about the bands being aped. Nevertheless, justice to the vintage death metal sound has been served. Shame it took so long for this thing to come out…