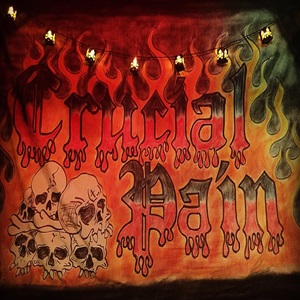 Seeking out local metal as much as covering the international landscape has been part of this scribe’s outlook since the late teens, when gaining the opportunity to contribute reviews and interviews for fanzines (remember print ones?). Crucial Pain from Danbury, CT bring major old school thrash influences back along with a touch of the newer, modern melodic touch on this self-titled debut EP. Expanding to a trio as Reaper bassist Jaymz Delisle recently joined, the twosome of Andy and Justin handled all the instruments, vocals, and songwriting duties for this particular recording.

The more seasoned people into the genre understand that not everything can be speed riffs and up tempo stomp to gain deeper retention – that it’s necessary to offer mid-tempo nuances or often ride a particular marching riff or two for maximum head banging, pit swirling action. Thus a lot of Exodus and Anthrax influences come to the forefront when taking in the crunchy riffs and barking/sneering vocals from Andy on “Live Free or Die”, while “Visions of Doom” has an alluring, downtrodden atmosphere right out of the gate through its quieter, clean guitar intro which segues into exotic, electric action and entertaining tom fills. Melody on the musical front appears to be a focus for this band – they never let a segment get away without some sort of hook on that part. Even when they go for more of the standard up-tempo verse for “Reigning Death”, although the instrumental section certainly gives the listener a nod to modern Trivium-oriented stomp (love Andy’s solo break on this one, wah-wah effects used properly).

While the five songs possess all the ripping riffs and gang vocal emphasis one would need in a thrash product, you can tell that the band didn’t really put as much bang for the buck effort on the production front. This sounds like a live rehearsal room recording, as cranking up everything on any listening device is necessary to hear what’s going on. A new recording appears to be underway for a follow up- so hopefully this will be improved upon, as Crucial Pain does have all the tools necessary to gain a good buzz for ardent West Coast to East Coast thrash followers.