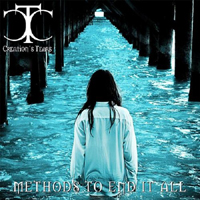 Impossible to knock something like this. Methods To End It All is self-released (on their own Cure For Poison Records) and is as good, or better than a lot of the Goth metal going around now. The brainchild of Brian Eddie Reynolds, Creation’s Tears parlays a brand of song-first, mid-90’s Paradise Lost/Lake of Tears metal on Methods To End It All. It’s morose and more morose, but not that kind of morose. There’s some sunlight. And it’s accessible. Accessibly morose. There we go.

Joined by former Paradise Lost drummer Lee Morris, Methods To End It All reeks of professionalism right down to the packaging. Putting out an album on your own and have it look like this is practically unheard of in this day and age considering no one buys physical product anymore, but this is of little concern to Reynolds. The man handles all guitars and vocals, and possesses a commercialized voice on par with Ville Laihiala in his Sentenced glory days, just check out the hooks on “I’m Falling” and “Untimely Reminder.”

Musically, Reynolds displays a keen sense of melody and is wise enough not to pick from the British Goth metal tree as much as he should. Instead, he employs simple song constructs that are usually driving (“Another Collison”), slow and somber (“Creation’s Tears,” which features Cradle of Filth’s Sarah Jezebel Diva) and radio-friendly (“Parody Paradigm”).

Not because we’re suckers for this style (we are), but Methods To End It All is a winner across the board, made all the more appealing because this is essentially one man’s vision, who is operating without the benefit (or hindrance) of a record label. Totally worth checking out if the song-oriented clamor of Icon and Draconian Times-era Paradise Lost tickles your fancy, or the suicide-on-ten stance of latter-day Sentenced rankles you as well. This album covers both ends. Nicely done.