Cnoc an Tursa – The Giants of Auld (Candlelight Records) 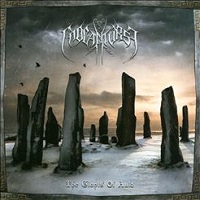 What, another fresh black metal band from the U.K.? You don’t say. The logic is probably that you might as well get in now while the getting is still good, and yeah, it’s all good. Granted, most of these newbies are going to have a tough go getting around the three-headed monster that is Fen, Winterfylleth, and Wodensthrone. Nevertheless, Scotland’s Cnoc an Tursa may not follow the same woods-happy sound of the trio above, but they posses very much the same grandeur, attachment to epicness, and above all else quality, which on their The Giants of Auld debut, is in spades.

The pendulum is tilted toward the epic/Pagan side of things on Giants, albeit without the folk-oriented instrumentation that tends to be part-and-parcel with bands of that ilk. What Cnoc an Tursa brings to the table is a lot of girth, especially in those Enslaved circa Frost riffs, of which make “The Lion of Scotland” glisten, while the symphonic hue of “Hail My Land of Fathers” and “The Spellbound Knight” are heavily orchestrated in between some sideways, and occasionally Nordic riff action.

“Ettrick Forests in November” emerges as the album’s choice cut, guided by momentous, almost Viking-like riff that would prompt the hairy Swedes in Amon Amarth to take notice. Cnoc an Tursa, though, does it largely without having to pander to the sides of melodic death metal or pure black metal. They’re somewhere in between, but not one of those groups that purposely evade description. The Giants of Auld is simply a valiant black/death effort, colored in the right areas, able to beat its chest when it has to, but knowing when to lay its sword down to fight another day. And yeah, these guys should be fighting for another day.