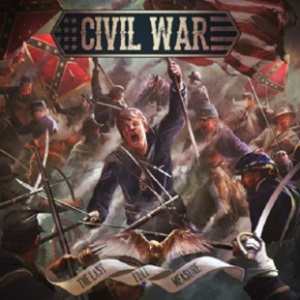 Historical battles and war-themes resonate in heavy metal – probably due to the emotional/physical connection and impact that the words and music convey. Sweden’s Civil War contains three ex-Sabaton members, plus singer extraordinaire Nils Patrik Johansson – he of Astral Doors, Lion’s Share, and Wuthering Heights work should you choose to do some digging into his bard oriented, Dio-esque delivery. Already up to their third studio album with The Last Full Measure, it’s interesting to hear the distinction between the past and present for their craft, as they sit firm on the metal side of the power genre while sprinkling nuances of the bombast and thunder that has pushed Sabaton to superstar status.

Expanding the dramatic nature of the marching strains with additional vocal choir supplementation for “Savannah” gives off a deeper Savatage meets Blind Guardian affect, allowing Nils to reach into his well of mid-range to slightly higher note holding extensions. The polka-oriented keyboard/surf riffing sections for “Tombstone” provide an interesting contrast to the otherwise blitzkrieg power riffs, the lead breaks spiraling into melodic madness. The fanfare keyboard strains from Daniel Mÿhr on “A Tale That Should Never Be Told” have that familiar “The Art of War” -Sabaton theme going on, while his work on “People of the Abyss” contains alluring, darker choices that make me think of 70’s artists like Rainbow and Deep Purple. Fear not people who want the guitar charge to lead the troops – “Gladiator” and “Strike Hard Strike Sure” lay down the thick riffing and complementary drum propulsion to sends the hordes chanting, clapping, and jumping abound.

Add in a lot of lyrical framework that teaches the listeners about the past through history and its many significant battles, heroes, and wars – and you have another Euro-centric power metal offering that’s slightly heavier than what Sabaton currently delivers, but doesn’t stray far from the familiar path if you know what I mean. The Last Full Measure is decent if not very familiar as a result – probably how most power metal mavens prefer their bands to progress.