Chronic Xorn – For These Sins Who Must Die (Self-Released) 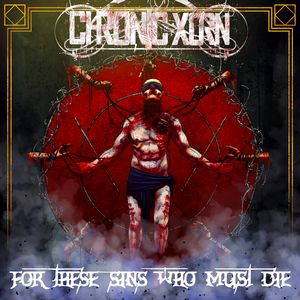 Modern death metal act Chronic Xorn have been doing their thing in India for the past decade. For These Sins Who Must Die is the band’s third release to date, following a five year period since 2012’s For Mercy. For an Indian act, they do have a bit of an American flair to their approach, but they also do a good job of diversifying their music.

A pleasant case of not knowing where to start with the genre tagging occurs after listening to Chronic Xorn’s latest release. It’s undeniably modern in its execution and owes a chunk of its sound to death metal, but there’s other things at play as well. While some may grimace at the suggestion of metalcore in there as well, along side melodic death metal, the fact is that it’s a far more interesting album than if they had decided upon any one particular pathway and stuck with it exclusively. The title track is a blistering opener (if you disregard the opening intro, which feels like it could have just been tacked onto the start of this track) that wields synths, frantic death metal riffing, and equally punishing blasts together with some groove and modern feelings to wake you up in an instant. “Necropolis III” has a more melodic vibe to it, but still brings some groove to it – a fresh vibe from the previous track but still uniform in its feelings. “Vox Populi” further expands the groove into more ‘core driven waters in a tasteful way. Some breakdown riffs are utilized, though never simply for the sake of doing it. These three tracks more or less sum up the EP in a sonic-sense, which always feels effective regardless of the direction that it takes.

Melody, heaviness, and groove all keep For These Sins Who Must Die moving with full energy ahead. Those who favor a more modern approach should find something to enjoy.