Chaosweaver – Enter the Realm of the Doppelgänger (Napalm Records) 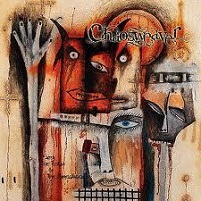 Any band that purposely namedrops the likes of The Kovenant must have little, or no regard for people’s perception. The Kovenant, of course, was the much-maligned Dimmu Borgir/Mayhem electronic black metal offshoot band that started promisingly with 1998’s Nexus Polaris and 2000’s Animitronic, then bombed out via 2003’s rather subpar S.E.T.I.. Finland’s Chaosweaver come to fancy The Kovenant (especially Nexus Polaris), and it’s readily apparent on their second album, Enter the Realm of the Doppelgänger.

Blending blankets of keyboards with straightforward black metal riffs, Chaosweaver are rather adept at creating high-wire, cinematic offerings. In fact, the keyboards are such a predominant force, that one tends to forget about Max Power’s brutish black metal bark altogether. It’s like you’re literally sucked into a vacuum of snyths and sci-fi concepts, which is exactly what the Finns want. Plus, their visual get-up is straight out of a wacky SyFy channel b-grade sci-fi movie.

“Maelstrom of Black Light” is the album’s movie-ready moment (think any one of the current science fiction escapades ala Prometheus), with heart-stopping synthesizers and a Dimmu circa 1997 cadence that makes the song an instant charmer. “The Great Cosmic Serpent” and “Repulsion” lay out those crunchy, double-bass-happy segments that many bands of the late 90’s black metal era fancied, while “A Requiem For A Lost Universe” crawls and sprawls via subterranean tempos and spooky voiceovers from Power.

Heavily orchestrated black metal as this usually finds itself in modern day Dimmu Borgir territory, yet Chaosweaver’s backward, late-90’s approach is a winner on Enter the Realm of the Doppelgänger. Aside from the mostly daunting keyboard swaths and crisp riff action, Enter the Realm of the Doppelgänger is one of those larger than life black metal albums, which probably means the Chaosweaver dudes are just waiting for the call from Hollywood…or the Finnish equivalent.