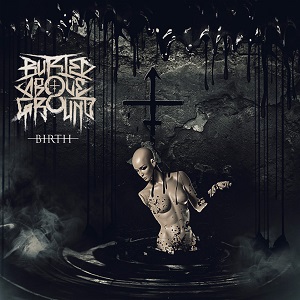 As a style, deathcore more or less came out and stagnated. As a shift away from more traditional death metal, many bands simply jumped on board with what bands like Carnifex and Whitechapel were doing and pumped the breakdowns up to maximum effect (or annoyance depending on the band in question). Though the form continues to live on, there’s not a ton of bands that bring anything new to the table.

Buried Above Ground do their best to provide a sound that’s more refreshing than the average deathcore act. There’s plenty of mid-tempo chugging going on (just check out opener “I Am God”), but thankfully they lay off the penchant for routine and monotonous breakdowns. Instead, they combine the chugging riffs with a symphonic edge to generate a more horror-themed vibe. On “We All Have Nothing” the band even combines it’s sound with clean female vocals to brighten up the scenery (not unlike She Must Burn). “Close Your Eyes” allows for some effective acceleration at points, as well as some brooding atmosphere at its slower portions. “Serpent” even closes the album with some enjoyable melodies that lurk occasionally below the radar. All these little things work for the band, but with an overreliance on mid-tempo chugging, it makes a chunk of the release feel repetitive. Songs are heavy as all get-out, but nothing ends up sticking (outside of “We All Have Nothing”).

There’s some promise in Buried Above Ground’s willingness to skirt the deathcore lines, but it’s still a work in progress. Those who enjoy the sound will like their more horror-esque qualities on Birth, but ultimately at this point, there’s too much that’s simply retreaded territory. Hopefully they’ll expand what works further in the future.