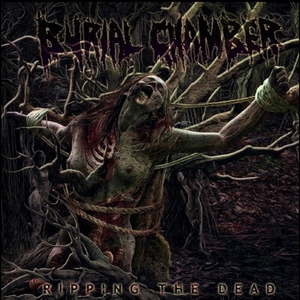 Ten to one odds someone in the band Burial Chamber really likes Suffocation. There’s more than a mere coincidence of “Suffocation-isms” that occur throughout the band’s second effort, Ripping the Dead. The band’s last release was back in 2010, and a quick listen should be comforting for any fans as it continues in the same path as the last one. But this is not exactly the place if you are looking for innovative material.

For what it’s worth, Burial Chamber have the Suffocation thing down to a science. Thick, heavy NYDM-styled riffing oozes from the Australian act’s repertoire. Listen to one track and it’s bound to leave a good taste due to the well-utilized groove (something that never lacks here) and lots of headbanging mid-tempo riffage. The vocals are brutal, the leads are strong, and it all fits together like chocolate and peanut butter. So what’s the problem then? A front to back listen undoubtedly results in some listener fatigue. Not because the material is poor, but rather each track sounds pretty similar to what came before it. While it’s refreshing to hear a death metal band that avoids perpetual blastbeats, the amount of mid-tempo pacing offers the same sort of redundancy. No one is going to complain about a band with a heavily Suffocation-inspired sound (although there are plenty of them out there), but the repetitive nature of the album weighs it down significantly.

For those in the mood for ‘90s-esque brutal death metal, Burial Chamber bring it in spades. But Ripping the Dead loses some of its spark due to its repetition and lack of creativity. Like the chocolate and peanut butter analogy above, its decent comfort food but it’s probably not going to be the only thing you need to have in order to make it to your next meal.