Blind Guardian – At the Edge of Time (Nuclear Blast Records) 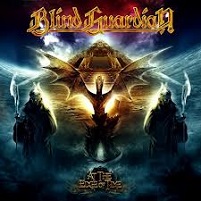 Blind Guardian peaked with Nightfall in Middle Earth. Let’s not kid ourselves or even try to deem A Night at the Opera or A Twist in the Myth as comparable, ’cause they’re not. Such a conundrum is enviable, but next to impossible to get around, which is why the relative effectiveness of At the Edge of Time comes across as a minor surprise. The Guardians have dipped back into the Imaginations From the Other Side pool, successfully blending it with the oft-overblown sound of their previous two albums. At times, things get out of hand, but then there are other times when you’re reminded why the Germans are still unrivaled in this area. All this adds up to their best album since the aforementioned Nightfall.

Things get off to a climatic start with “Sacred Worlds,” a nine minute-plus exercise that introduces some heavy orchestration and an ebb and flow not heard from the Guardians in over a decade. “Tanelorn (Into the Void)” is the type of up-tempo, speed metal monster BG has come to abstain from, so of course, it ends up being the best song on the album, complete with a magnificent chorus from Hansi Kursch, whose voice has aged quite well. The man is equally as impressive on the soaring “Valkyries.”

The album tends to wander off around the halfway point, starting with “Road of No Release,” a throwaway ballad, that is only outdone by “Curse My Name,” which passes beyond the realm of tedium. You’d think the band would at least reference the simple, solemn tone of a “Past and Future Secret” or “Black Chambers” for these songs, but both are wrought with too many choral effects and empty symphonic arrangements.

“A Voice In the Dark” (which was the obvious choice for first single, even though the video is quite laughable) is a jarring number that proves BG is still built for speed. And like all of their early works, the chorus just oozes confidence and power metal swagger. Album closer “Wheel of Time” comes close to be a jumbled mess, but rescues itself with two climatic, soaring choruses and some well-placed Middle Eastern influences.

By all appearances, Blind Guardian doesn’t appear too interested in re-writing the past, no matter how close (at times) At the Edge of Time hits on their early mastery. Such has always been the case – BG is in constant motion, something that has continually hurdled them past just about everyone in power metal. At the Edge of Time is a quality, worthy release, but the fact remains that over a decade removed from their seminal, mandatory, godly works, the rest of the power metal scene has yet to catch up to the Guardians of the Blind.