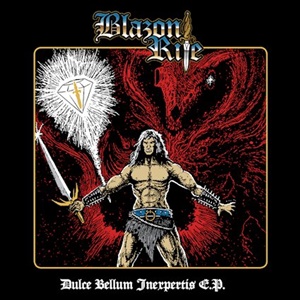 Imagination sparked a love of Dungeons & Dragons for many adolescents and teenagers of the 1980’s – spending weekends away in that role playing fantasy game rolling the 20-sided die, casting spells, and fighting to stay alive in another world. Using that as a lyrical base, Blazon Rite from Philadelphia, Pennsylvania with this EP Dulce Bellum Inexpertis embrace an epic, NWOBHM meets power style that shine bright for many old school fanatics. Guitarist/primary songwriter James Kim created the concept of a warrior transformed to a wilderness wanderer and eventual king on earth under the will of a mysterious horned demi-god that has just as many musical twists and vocal turns as the storyline.

Certain segments breed familiarity in terms of vocal melodies and musical parts. Following the tranquil opening for “Diamond Daggyr” for instance, once the electric charge hits forth in the main verse, the sequence mirrors the key components of “Neon Knights” from Black Sabbath, although taken through a much more streamlined, primal approach as far as the guitar / bass tones. Vocalist Johnny Halladay has more of a bard-like jester nature to his voice and delivery – he will never be mistaken for a soaring, note-perfect Halford or Dickinson clone, more aligned with say Peavy of Rage in terms of personality and infliction. He has a great ability to add flair to the dramatic, matching many of the marching and galloping strains of “Into the Expanse (Solar Portals and Celestial Holes)” with vigor and spite that makes me feel like Slough Feg have factored into the Blazon Rite outlook, some folk guitar parts sprinkled in against a main guitar lead break that has a pinch of “Wasted Years”/Iron Maiden as it’s influence. Most of the time on a four-song, twenty-minute EP you are left wanting more – and that could also be true of this – but there’s enough dynamics in terms of tempos, performances, and approach that most will want to experience this on repeat, feeling as if they are part of the journey and transformation.

Together only since 2019, Dulce Bellum Inexpertis is a fine opening salvo for the quartet – hopefully more modules provide even more labyrinth-like storylines and equally engaging music backdrops, as this is exciting epic/NWOBHM-infused power metal. 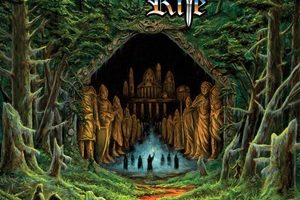