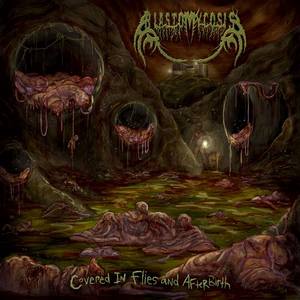 Falling well within the confines of ‘if it looks like brutal death metal, it probably is brutal death metal,’ there’s probably not a soul out there that can’t outright imagine a glimpse what Blastomycosis’ second album sounds like based on cover and album title. Originally self-released back in 2015, CDN has given it a re-issue, which for some may beg the question, “Why this album?”

Further investigation into the material at hand will lead to some unexpected discoveries. One of which is that Covered in Flies and Afterbirth was mastered by none other than Dan Swano. So the band gets a leg up in terms of the brutality their sound provides. Then there’s the song titles, which are so brutal that they border on absurdity, including “Rape Shark,” “Cream of Rotting Cunt,” “Battery Acid Ballcuzzi,” and this scribe’s personal favorite, “Tsemen Tsunami.” Rather twisted for sure, but amusing on a certain level and at least they aren’t trying to go the pseudo-intellectual route – they lay it all out straight. The same formula applies to their approach, which takes from the Suffocation and Dying Fetus columns with aplomb – offering a knack for groove and switching in some more technical material in a short life span (most songs fall in the 2-minute range). Short explosive bursts that get in and get out, never outlasting their enjoyment. A few goofy samples are used effectively, and are small snippets that don’t get grating with repeated listens. Then there’s the last little surprise, which is the brutal vocals of Isabelle Tazbir, who provides yet another example of females in extreme metal that can more than hold their own in demonstrating ultra-low growls and rasps (she has since left the band).

Fifteen songs in 31 minutes may seem more like grindcore than death metal, but Blastomycosis deliver a straight-forward attack on the senses with Covered in Flies and Afterbirth. It handles the genre tropes with flair and while it may not change anyone’s mind on the matter of brutal death metal, there’s no denying it’s an enjoyable and fun listen. An under-the-radar release that may hopefully find a second wind due to its reissue.