blackQueen – March of the Obsidian Triumvirate (Self Released) 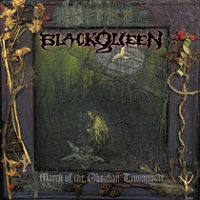 After an absence of nearly a decade, blackQueen return from a long hiatus with their third release, March of the Obsidian Triumvirate. Founded in San Francisco during the late 90’s, blackQueen released two albums in the few years they were originally active before disbanding in 2001. Ritual magick and Italian giallo film are their biggest influences so you know you’re in store for something different. Self-proclaimed “Witch Metal”, they are “a musical representation of the powers of nature” and while I don’t really know what that means, the end result is a pretty boring record.

Now to be fair, blackQueen are as much performance art as they are a band and that may not translate well when it comes to the album format. Known for their live antics and recently producing a short film that was just shown at Phil Anselmo’s Housecore Horror Film Fest, they are undoubtedly very creative individuals.

Consisting of four songs and a 15-minute piece of experimental noise interlaced with film samples to end the album, March Of The Obsidian Triumvirate, is interesting if nothing else. The majority of the time they sound like a black metal band but a highly progressive and jazzy version of one. Utilizing very angular riffs and off kilter time changes, they move from straight up blast beats to clean jazz tones without hesitation. They are clearly very talented and more than competent musicians as they flex their chops and technical prowess throughout the album. There’s a lot of synth and electronics thrown into the mix that do well to provide a dark and eerie atmosphere to the record so you can start to get a sense of what they seem to be going for from a performance perspective as there are times where the music does feel like a film score.

Being a huge fan of Pete Jay’s other output (see Oakhelm, incredible yet criminally underrated pagan black metal) I was really looking forward to hearing blackQueen but unfortunately ended up disappointed. I’ll pass on revisiting this album, but won’t hesitate to check out their short film, BabeGhostWitch.