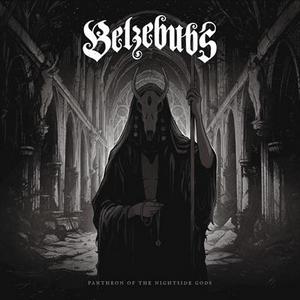 Gimmicks are nothing new to music, and when employed tastefully, they can be an effective tool in generating some interest (or cause utter disaster when used as a crutch). Belzebubs are bound to generate some Deathklok references, as they originated as a light-hearted (yet genuinely metal) comic from JP Ahonen and this represents the first jump from the page to the speakers for the virtual act. But where the comics have a more humorous tone to them, Pantheon of the Nightside Gods brings the all of the genuine Scandinavian meloblack tones in a way that rivals the strongest of that ‘90s scene.

That said, there’s also a high bar to be lived up to, as the band employed Dan Swano for mastering, and has a slew of guests including ICS Vortex and Lindsey Schoolcraft (among others) aiding them on the record. Then there’s the band itself (of which this scribe has a few hunches to their identity – particularly in the vocal realm), and one can quickly tell as “Cathedrals of Mourning” comes on that this is a love letter to the Scandinavian black metal scene, even if it does manage to go above and beyond mere imitation. Big, epic sounding synths that fill the air with darkness and majesty pair up with some masterful tremolo riffs and sweeping melodies (even a flashy solo here and there). There’s no need for the band to play it safe either, as the comic image already tears them away from the ‘trve’ acts of the scene, so some tracks take it upon themselves to veer further left of center, such as the folk-ish injections on “The Crowned Daughters” or a proggier approach on lengthier tracks like “Dark Mother” or “Acheron.”

Little tweaks to the formula are what allow the 53-minute album to keep your ears highly attuned to what’s happening at all times, and proof positive that the band has some serious songwriting chops. Combined with the killer production and sound quality, there’s really nothing that separates this from other top tiered acts in this genre. This is something that could have easily just been a joke, but the deadly serious tone and execution cements it as something far greater. Those who dig symphonic black metal are treated to an excellent tribute that goes the extra mile to make a name for the band outside of the comic book pages (which really are worth a look, even if you aren’t big on black metal) in an inventive and enjoyable way.