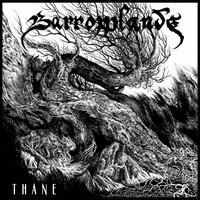 Generic wrap-up: A band from Portland that plays black metal. Before you run to the hills screaming “oh no, yet another Cascadian black metal band,” allow yourself the time to actually check these guys out. You might find yourself to be pleasantly surprised by Thane. The band previously released Thane early in the year independently, and is receiving a vinyl release through Sick Man Getting Sick Records.

What gives Barrowlands an edge over a number of their woodsy black metal brothers in arms is the element of doom. Thane is a well-polished (by black metal standards anyways) and melodic offering, with plenty of tremolo picked riffage that’s sure to catch the ear, but the emphasis is on sorrow. The five songs of Thane are likely to take you on a melancholic journey that successfully avoids the tag of being an Agalloch-wannabe. There is a certain doomy weight to tracks like “Peering Inward” that help to distinguish the band amid an ever-growing crowd. Some highlights include the extended intro to “1107,” which includes some majestic riffing along with some strings before heading into some highly enjoyable melodies in its second half. “On Bent Boughs” employs a similar opening statement (not as long though), yet wrought with sorrow instead of more uplifting tones. The 11-minute closer is a dark and brooding one, fit with some acoustics that end the album with the yearning to hear more.

If you are on the lookout for some “Cascadian” black metal that has more of it’s own personality, Thane should be on your list to check out. With just the right mix of atmospheric black metal (without sounding too cold) and doomy heft, Barrowlands is a name that you should be hearing more of in the future.