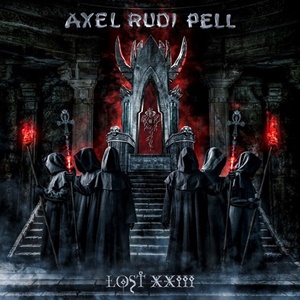 Guitar heroes are a dying artform – even in a traditional movement of melodic hard rock/metal. Axel Rudi Pell has maintained his faithful passion to Rainbow/Dio-esque material since the start of his solo career in 1989. Arriving at his 19th studio record for Lost XXIII, Axel always surrounds himself with premiere musicians adept at handling the bluesy-based riffs, various anthem, ballad, and epic arrangements, as well as constructing songs as opposed to just showcasing furious fret burning workouts. Those who expect any surprising left-field turns will be disappointed though – as ARP in 2022 sticks to his aural wheelhouse, which can be a success to some, while burdensome or boring to others.

After the atmospheric “Lost XXIII Prequel” intro where you have low register chanting and pomp-like keyboard support as well as marching strains against slower, bluesy guitar licks – the first proper track “Survive” kicks the album off in mid-tempo fashion, vocalist Johnny Gioeli standing toe to toe in his familiar gritty register against the bright riffs and steady rhythm section foundation. From there the record continually shifts gears – a street level effort like “No Compromise” containing specific lines ready for sing-along support (‘shout it out loud’), while the power and finesse of “Follow the Beast” proves that age and maturity haven’t slowed down these gentlemen when they want to crank up the energy to rival many hungry youngsters. No Axel record is complete without a couple of epic/ballad-oriented efforts where the musicians stretch their chops into longer compositions – and that’s where “Gone with the Wind” and the title track at over eight minutes each slot in, the former featuring great pacing and proper framework by drummer Bobby Rondinelli and keyboardist Ferdy Doernberg in key transitions while Axel builds deep connection through his extended, thoughtful phrasing in the lead break. Every musician also gets a mini-spotlight on “The Rise of Ankhoor” instrumental, a 3:47 effort that recalls classic Deep Purple meets Uriah Heep and even Iron Maiden in terms of chord choices, shifts, and hooks.

Lost XXIII in comparison to most records in the Axel Rudi Pell catalog is solid, yet not exactly surprising in terms of servings. Be sure to sample the singles first to decide on where this sits in your catalog – for this scribe, it’s similar in feel and execution to the last studio record Sign of the Times, which may not necessarily get as much play as his 90’s to early 2000’s efforts.