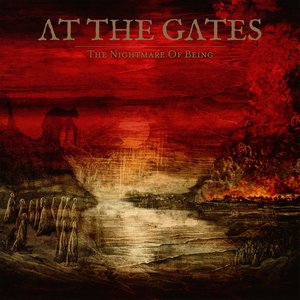 With this being their third album post-hiatus, it should seem that the ‘deliver Slaughter of the Soul pt 2’ clamoring is at its end. At the Gates have consistently shown in this era that they aren’t about to repeat the past, though happily they do like to invoke some moments of nostalgia as they continue to tread forwards. The Nightmare of Being is an album that’s at times frenetic and thrashy, yet other moments are more experimental, dark, and introspective.

For those seeking the adrenaline rush that the band has often provided in the past, you can rest in some ease knowing that At the Gates have delivered a few notable bangers that will instantly grab your attention. Already released single “The Paradox” and “The Abstract Enthroned” are visceral cuts that should give you that Gothenburg thrill of galloping riffs and entangled melodies with plenty of bite. “Touched by the White Hands of Death” hits this mark too, but only after an eerie and mysterious opening. But truthfully, more interesting on this release is where the band goes further down the experimental rabbit hole. “Garden of Cyrus” will immediately pop up on the radar here, with an old school feel to it (similar to the band’s first two releases) but done in a more mature formatting and combining it with the bleak melancholy that the band has reveled in post-hiatus times. Complete with lurking riffs and saxophone, it’s a really dark melodic treat. Later track “Cosmic Pessimism” has a killer, almost jazzy groove to it that successfully merges with At the Gates’ style to a tee. Moving even further into bleak territory is “Cult of Salvation,” where elegantly melodic yet longing riffs tangle with more anguished moments and just a tad of the melodeath you’d expect. Closing cut “Eternal Winter of Reason” sits as one of the more ominous tracks, having an urgent vibe that still manages to obtain a pensive feel at times – an effective closer for one to think on after an album that can pull in several directions.

While At the Gates continue to prove that they could easily write a Slaughter 2 if they really wanted, the metal world is better for having them continue to express themselves in more experimental and murky waters. The Nightmare of Being should please all ‘era’ fans of the legendary act, while still allowing them to take a few steps forward into fresh territory.