Astriferous – The Lower Levels of Sentience (Me Saco Un Ojo) 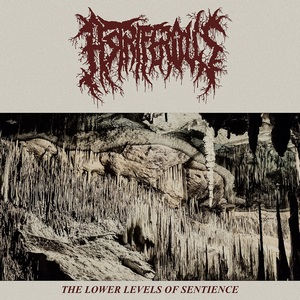 Sepulchral death metal at its finest, it doesn’t take too long to see what Astriferous are doing with their EP, The Lower Levels of Sentience. A Costa Rican act with two previous demos under their belt prior to this release, they’ve been an active bunch since their inception in 2018. While the influences are quite telling, The Lower Levels of Sentience is a solid starting point for those hip to the cavernous side of death metal.

Not quite fully retro, but definitely not modern either, Astriferous skirts some of the problems associated with both. While it’s abundantly clear after about 1 track the amount of influence a band like Incantation has had on the young startup, they also do their best to avoid complete plagiarism too. All four of the tracks within have plenty of speed up to them, to the point of raging blasts and death metal howls, and they slow to near-doomy tempos, particularly the last track, “Necrohallucination.” There’s a raw and primal feeling to the tone of the album that suits it well, which makes some of the faster sections like in “Exercises in Tantric Sorcery” feel as if the band is about to become unhinged (in a good way). That feeling is what moves the music forward, and the band would be wise to really capture its essence with their future recordings.

Astriferous position themselves as a new name to watch for those into the murky and gritty side of death metal. The Lower Levels of Sentience shows the band’s influences, but no doubt as they forge ahead, they are bound to shed them and hopefully go further into those frenetic and chaotic feelings that shine across this EP.