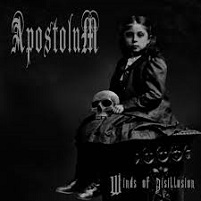 Last heard from in 2006, where their cover of Katatonia’s “Brave” was a sort of scraggy version of the original, Italian depressive/Goth black metallers Apostolum with their first full-length in the form of Winds of Disillusion. Considering they both share the same country, one can draw an immediate line to Forgotten Tomb, who in earnest, do this style much better than Apostolum. This is simply a more feral take on the slightly straightforward Gothic black sound; you’re not going to get any mounds of extremity, but ample amounts of fuzz, awkwardness, and grimness are in full supply.

Six cuts at 55 minutes here, where closer “Gleam of Lucidity” really stretches out the run-time. The basic 4/4 run of most of these cuts is what helps keep it in check, even though one wishes the riffs would be more exciting than of the rudimentary sort, especially on “Higher Planes of Existence” where a memorable guitar chime isn’t capitalized upon – it’s ridden out by some plain ‘ole fuzz-box BM riffing. The weary, ominous steps both “Debris of Perception” and especially “Less Than a Step” can be considered winners, especially the latter, which is simply a keyboard patch and whisper number, yet emerges as the album’s most inviting moment.

As one tries to make due with elongated riff segments and saliva-bred rasps that encompass the aforementioned “Gleam of Lucidity,” it becomes apparent Apostolum would be better suited if they kept their ideas per song to a minimum. They have the right modes in check (and approach), but it feels like they left a lot of would-be good ideas on the table based on lack of execution alone.