Anopehli – The Ache of Want (Halo of Flies) 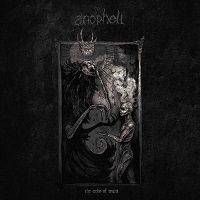 Take out the cello and what do you get with Anopheli’s The Ache of Want? A regular ‘ole d-beat sludge core album? Yeah, probably. There’s not much of a point in beating ‘round the bush here, as this “all-star” cast (their words, not ours) features members of such outfits as Light Bearer, Monuments Collapse, and Fall of Efrara, many of whom may (or may not) be familiar to the regular metal listening ear. Nevertheless, the group has pulled together an otherwise identifiable and hard-charging effort in the form of their sophomore effort, The Ache of Want.

Fundamentally, Anopheli follows in the footsteps of just about every same-wavelength d-beat sludge core before them. You know the drill: Ramp up the punk downbeat, turn up the distortion, churn out some easy riffs, and let some burly dude have at it and roar. It’s a beaten to death formula, but here, the addition of melancholic cellos rescues the whole thing. Played almost constantly, they’re a wonderful accompaniment to the band’s compositions, in particular, the more mid-pace and off-beat cuts, which would be “Acts of Man” and the hushed, all-acoustic “Ruminations,” a song that probably would unthinkable for most bands of Anopheli’s ilk. (Tenderness, touch, et al, are elements rarely utilized in this forum.)

Because of the gracefulness found with the cello work (provided by the solely-named Nicole), The Ache of Want is much more open and useful album than it should be. The general plunder of a song like “Awaken” is easily complemented by the grinding, more varied “Somnambulant,” where Anopheli does, at least for the time being, manage to write their way out of one of the most constrictive boxes in all of extreme music. All it took was a member of the violin family.