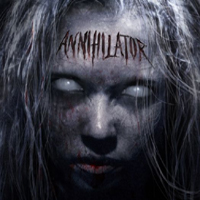 Armed with his usual bag of tricks and a reported 66 guitar solos (!), The Jeff Waters Band…er, Annihilator return with their 13th studio album in the form of plain ‘ole Annihilator. For someone who has been in the thrash game since the late 80’s, Waters has come full circle, foregoing guest spots (see 2007’s Metal) and balladry (2004’s All For You) for a focused, Never Neverland-styled platter of all-out thrash. It’s not a reach to say this is Annihilator’s most aggressive album since the aforementioned Never Neverland and of course, their hallmark Alice In Hell. And for that, this is probably the band’s best work since the dawn of the 00’s.

The only holdover with Waters is singer Dave Paddon, who on his fourth studio album has alas done away with his comedic vocal stylings for something a bit more serious. This is none more evident on opener “The Trend,” which starts nicely with Waters spraying an array of sharp melodies, setting us up for a thrash-o-rama where Paddon barks about the ills of the music industry. The equally fast-paced “Ambush” and “25 Seconds” (which is about a school shooting; a topic Exodus just touched upon as well) showcase Paddon as a fluent, more-than-competent singer who is no longer in the position to just play backseat to Waters.

As for Waters, the man has a handful of his usual brilliant, shining moments. Off the top of our heads, the free-wheeling “Coward” comes to mind, as does “Nowhere To Go,” a song that is patterned after some of the band’s early melodic work. Yes, there are a truckload of guitar solos here, but Waters is a bona-fide guitar hero, capable of doling out majorly insane runs as well as soulful, classic metal-inspired shredding. His songwriting and riff choices are now instantly identifiable and if you played this and the band’s seminal, early albums back-to-back, an easy parallel can be drawn.

Even with all their productivity over the years, Waters and co. remain a virtual nonentity on North American shores. Live dates on this continent have been scarce (read: not since 1993), so hopefully the union with Earache will break that spell. It makes sense when you break it all down: Annihilator should be in the thick of this waning thrash revitalization, yet they’re always on the sideline here. It’s not that far from Canada, you know? Just chalk Annihilator up as another sturdy, reliable thrash platter from a man that can run circles around just about every guitarist in thrash. Shame that most of us will never see it in person.