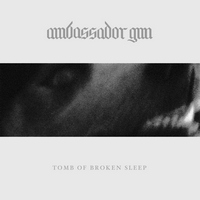 Melodic grind? One might think that the term would be a bit of an oxymoron, but then again, perhaps they just haven’t been exposed to up and coming grinders Ambassador Gun. But don’t worry grind fans, there’s still much blasting on display to keep all of you satisfied as well.

Ambassador Gun’s approach leans firmly towards a combination of sludge, d-beat, and vitriol-fueled grind. It’s really the sludgy influences where the melodies creep in. But don’t expect something that sounds out of place. You can hear the subtle melodic undercurrent when the first track, “Heart of Corruption” kicks in, but it doesn’t take long for the track to explode into hyperspeed anger and aggression. It is what allows the often pushing 3-minute grind tracks to keep their momentum and interest intact. The title track also exceeds at bringing pissed-off melodies front-and-center. Then there’s the crushing groove of tracks like “Once Upon the Sauce” and “Mighty Steed” that keep heads bobbing until their breaking point (or until some blasting interrupts things). All in all, the band is quite adept at making sure that there is significant depth to the album, particularly for a d-beat grinder.

At 26-minutes total, Tomb of Broken Sleep is a rare piece of grind that keeps the intensity intact, yet keeps you coming back for more, even to the point of a back-to-back listen. At three albums in, Ambassador Gun seem to have a good impression of their strengths, and are utilizing them to design sludgy grind that can just as easily crawl as it can blast through leaps and bounds.