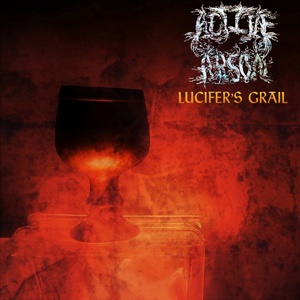 Kudos to a newer thrash band like Active Arson citing influences beyond the Bay Area norm into artists like The Bangles, The Doors, and Autograph. Active since the fall of 2017, this Toronto quartet have released their debut six-song EP with Lucifer’s Grail. After a few spins it’s apparent that the band possess interesting ideas and solid structures – while still probably needing a bit more time to flesh out the rough spots for a distinctive approach.

When the rhythm section chooses to get on their gallop horse for “Dance With the Demons”, there’s a beefy mix of American and Teutonic power to the proceedings, the transition moment pumping out steady double kick activities plus a ripping mid-tempo stomp riff sure to cause massive body shuffling in the pit. A punk-oriented feel penetrates the first few riffs of the title track, while the band dips back into some traditional metal flair a la Priest/Maiden before crushing heads in the mid-section through the Sid SQ/ Phil Arson crunchy guitar combinations. At other times you can tell Active Arson appreciate 90’s acts like Machine Head and Pantera, but don’t succumb to easier squeals or obvious staccato-driven picking – although there are times that the lead breaks venture into Kerry King/Slayer-like frantic affairs not necessarily aligning with the atmosphere or arrangement at hand. A haunting intro pushes out the doom-textured “Sun”, a groove-laden track that showcases some of the band’s intricacies and interplay as well as energetic up-tempo twists for a solid three-minute plus instrumental.

Where the band needs a bit of improvement can be in terms of occasional predictability for the vocals of Phil Arson – matching a lot of the riffs in a uniform, barking snarl for “Cast Away” that distracts from the impact of the music. You just keep hoping for a bit more powerful presentation in that department – and that possibly can happen with more seasoning, rehearsals, and live shows under their belt. And the band logo seems more logical for a death metal act than a thrash band – but in the end, Lucifer’s Grail won’t disappoint most into primal 80’s-style thrash and should get them on solid ground to build up for the next recording.