A Tortured Soul – On This Evil Night (Pure Steel Records) 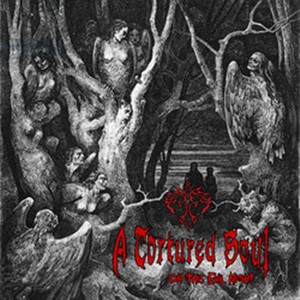 Milwaukee, Wisconsin’s A Tortured Soul have been a steadfast unit in their conventional metal approach – very much sitting in an old school pocket when King Diamond, Mercyful Fate, and Helstar nestled in around the underground to above ground thrash explosion. On This Evil Night cleans up a six-year layoff between albums, as the group pumped out three studio records between 2005-2010. Considering three-fifths of the lineup is new in that interim (vocalist Rick Black and lead guitarist Nate Gorenc the holdovers), one would not be surprised to see a shift in sound – but upholding their true values, A Tortured Soul champion a sound that has power riffs and shades of speed, hefty melodies and a sense of heaviness tempered with moodiness that epitomizes the genre.

Sitting in a comfortable niche of mid to late 80’s traditional/power metal, the darkness aspects of certain minor chord combinations as well as multi-part melodies give “Black Dragon” and “Waiting for Death” a lot of King Diamond-ish qualities, that evil creepy/crawly atmosphere that put his solo material on the metal landscape. Bassist De Wayne Bolle gains as much exposure in the mix as Gorenc and second axe man Tommy Lodwick, pumping out that D.D. Verdi meets Steve Harris free flow finger action on the crunchy anthem “Smoke” as well as the epic, 9:35 twister “Mourning Son” where extended instrumental action from Nate’s tapping/ arpeggio proclivities will gain kudos from schooled musicians. Subject matters may be familiar themes to most – horror, religion, and darkness make for standard metal word flow – and the leather imagery suits the expectations listeners should expect stylistically.

The ultimate decider for appeal could be in the voice of Rick Black. There’s no doubting his ability to hit the bird call notes- see the title cut for evidence of those Rivera/Diamond shrieks – but it’s when he chooses to inject more of the lower and mid-range melodies that he can be a bit too dramatic for the material at hand. “Crimson” for instance has a natural mid-tempo groove oriented flow a la Metal Church, the background vocals at times supplying an eviler side but his tendency to shout or be sneering takes attention away in a John Connelly/ Nuclear Assault manner that isn’t close to what A Tortured Soul wants to portray. It’s one of those rare times where his King Diamond falsettos work so much better during the furious rhythmic mid-section than his conventional delivery elsewhere. The clumsy cover doesn’t do the band any first appeal favors either.

Solid US power metal for sure, plenty of tasty riffs to sink your teeth into, On This Evil Night has that cult-like appeal a la Helstar, Metal Church, and possibly Liege Lord as well. The thirty-something crowd and above will dig this more than the youth, that’s for sure.