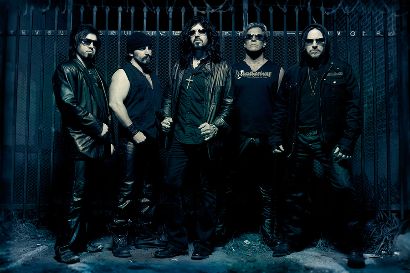 California-based classic metallers LEATHERWOLF have announced that they will no longer take part in the upcoming “Metal Masters” North American tour with VICIOUS RUMORS and SEVEN WITCHES.

“We’ve got some bad news for everyone out there who was looking forward to seeing us with VICIOUS RUMORS and SEVEN WITCHES this fall,” LEATHERWOLF says in a statement. ‘We have been forced to make the decision to bow out of these dates for economic reasons. Unfortunately, the final numbers our booking agent presented us with a couple of days ago are quite a bit lower overall than what was originally anticipated and conveyed to us when we first agreed to do this tour. And the bottom line is — the touring business is all about the bottom line! Numbers either add up or they don’t, and for us they simply did not. As much as we want to be out there and bring the Triple Axe Attack to all the fans, we cannot afford to lose money on the road. So instead of doing this tour, we’re gonna try to book some shows on our own, including weekend fly-outs, and hopefully get to play for as many of you as possible. In fact, any clubs or promoters interested in booking LEATHERWOLF can get in touch with us directly at booking@leatherwolfmetal.com.”

LEATHERWOLF’s next show, scheduled for Saturday, July 6 at Brick By Brick in San Diego, California with support from SINNER’S RAGE and NUKEM is going on as planned.