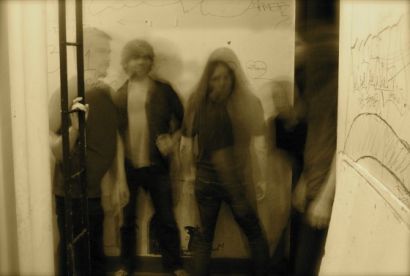 Together they’ve manifested a terrifyingly claustrophobic, seven-track journey of sound where the collective sentiments of fear, trauma, rage and repugnance collide into a cathartic state of brooding, audio disease.

Fittingly titled, Horrible Chamber, the follow-up to 2009’s This Face was recorded at Seizures Palace by Jason LaFarge and mixed by Brian Beatrice at audio Engine and mastered by James Plotkin, with additional elements recorded by Beatrice, Dubin, Thornton, and Mizumachi in various chambers.

Comments the band in a distant shriek: “We are thrilled that Seventh Rule is about to unleash Horrible Chamber upon the masses. We have been working hard creating an extremely unique record that will make people feel ecstatic about feeling bad.”

Horrible Chamber will be unleashed via Seventh Rule Recordings on October 15th. Pre-order details to be unveiled in the coming weeks.