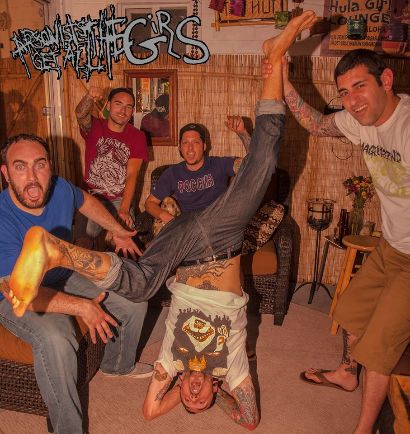 Santa Cruz, California’s progressive experimental band ARSONISTS GET ALL THE GIRLS (AGATG) are announcing their spring 2014 headlining tour with support coming from THE LAST TEN SECONDS TO LIFE, BEYOND THE SHORE, and SEEKER.

Three openers will be appearing on split dates, which include YOUR CHANCE TO DIE, and LORD OF WAR. The Listen To The Color North America Tour 2014 will start the end of February and run for approximately 40+ dates across the US and Canada.

On the way home after the bands last US Tour, AGATG van broke down in the mountains of California. After being stranded for 35 hours, they were able to get home but the van was beyond repair making it impossible for them to get back out on the road. To help the band get back out to their fans on this North American tour, AGATG are reaching out to the fans through an IndieGoGo campaign to help raise money for a new touring van.

Perks of their campaign include autographed drumsticks, cymbals, and posters as well as rare stage backdrops used on previous touring, a chance to hang out with the band while on tour and drummer Garin Rosen’s full drum kit used during the recording of their latest album Listen To The Color.

To help out the band – visit their IndieGoGo campaign at this location.

Arsonists Get All The Girls, Beyond The Shore, Seeker:

Arsonists Get All The Girls, The Last Ten Seconds Of Life, Beyond The Shore, Seeker:

Arsonists Get All The Girls, The Last Ten Seconds Of Life, Beyond The Shore, Seeker, Your Chance To Die:

Arsonists Get All The Girls, The Last Ten Seconds Of Life, Beyond The Shore, Seeker, Lord Of War: