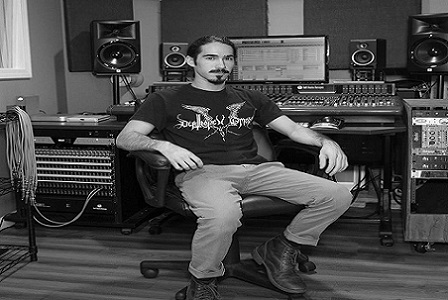 As one of the more exciting prospects on the American black metal scene, Connecticut’s Autolatry were on the cusp of some bright things before flaming out. Over the course of six years, the band doled a handful of wide-ranging, sometimes jazz-laden, sometimes prog-laden efforts, particularly their Native swansong. But alas, the long haul wasn’t to be, but guitarist Dave Kaminsky has picked up the mondo-adventurous BM/extreme baton with his new project, Stone Healer.

Kaminsky’s first release under the new banner is He Who Rides Immolated Horses, an unconventional, heady four-song offering that defies convention, while wholly staying true to the black sound so prevalent with Autolatry. Composed entirely by himself, Kaminsky displays some otherworldly technical know-how, along with sheer songwriting dynamics, thus lending to the notion Stone Healer could be more than a one-man project in the future. For now, the man has every right to be excited about his new project, which is why we sent some questions of the electronic variety for him to answer…

Dead Rhetoric: To start with the obvious: You’ve been a part of various bands for years. What made you want to break out and do you own thing with Stone Healer?

Kaminsky: Honestly I kind of stumbled into the creation of Stone Healer. About a year ago my last band Autolatry was in a state of lineup flux, and while I wanted to be on the road and touring constantly, the rest of my lineup either couldn’t or wouldn’t make those kinds of time/energy/money commitments. Which I totally understand. Over the winter and spring I flirted with the idea of revamping Autolatry with a new image, new sound, and renouncing the association to firmly being rooted in “black metal,” but it just felt wrong the more I thought about it. I wanted to just let the old group peacefully die and allow the cool things we did to have some closure. More importantly, I concluded that I needed a clean slate to work with – in terms of membership, creative input, musical direction, name – everything. The act of moving on ended up being a monumental catalyst for the music turning out how it did and a hugely symbolic and meaningful personal life event. I don’t think I would be happy with these songs if I ended up releasing them under the Autolatry brand like was initially intended.

Dead Rhetoric: What are some of the things you’re learning along the way?

Kaminsky: Obviously life itself and being a musician are learning experiences in their own rights, but my experience with Stone Healer so far has been really similar to my roles in all my past projects. I usually write all, if not most of the material for anything I’m involved in, as well as handle recording and mixing duties, so those parts of the process with Stone Healer were no different than ever. I guess the major thing I learned through the writing of the Horses EP is just more about myself as a being and the nature of my music. I think in a way – especially with Autolatry at times – I felt I had to nudge the music one direction or another. Like, “Nah, I need to make this song fast and black metal as fuck,” or “Shit, this tune needs to be progressive as fuck.” You know, things like that. When I just relaxed a bit with the writing my process was more like “Fuck it, the music that comes out is going to be Stone Healer and whatever it is, it will truly be representative of who I am.” As a result, I definitely now know that I never want to have to write for a project whose creative output has to be a certain thing.

Dead Rhetoric: Is doing the “one-man” thing as satisfying as you initially thought?

Kaminsky: The way I operate Stone Healer is almost no different than how most of my past band experiences went. As I mentioned above, I usually end up writing most of the music and arrangements for any project I get involved in, and usually handle almost all of the business side of things as well. With nobody else fully “on my team” right now, it’s actually very liberating to have full responsibility of everything by default with no discussion. I guess the only downside of not having a full band is that live performances are not possible right now, and I hope to change that. Ideally, I’d put together a “live” lineup and maintain creative control of the music and lyrical content. But for now, flying completely solo is definitely satisfying a part of my creativity that I wouldn’t otherwise have had an outlet for.

Dead Rhetoric: As for Immolated Horses, how long have these songs been floating about?

Kaminsky: I believe a couple of these songs were meant to be Autolatry songs on a future release, but at the time lacked lyrics and full band arrangements. Definitely “Unconditional” was, and I actually considered having us perform it live during our last couple shows (didn’t happen though!). Once I committed to releasing the music under a new moniker, I just went full steam ahead in finalizing arrangements for the existing and partially completed material, and continued to write from scratch the remaining songs. I believe “Lark’s Head,” “Scythe,” the title track were all written after it was decided that Autolatry would come to an end.

Dead Rhetoric: Autolartry gradually started to shift away from some of its black metal classifications, and some of that can be heard here. However, there’s still a distinct progressive edge to the songs. For you, was there a particular focus when writing these songs?

Kaminsky: There really wasn’t a specific focus with these tunes – especially not a genre focus. I just wanted to release music that perfectly represented the sound of my soul and who I am, so genre classifications were seriously the last thing I was thinking about when putting this stuff together. Now that I get asked pretty often “what would you call this music”, I can look at it with a different perspective than when I was writing and I think it does fall into more of a “progressive metal” category. At the end of the day, I like heavy, fast, fun, soul-felt music that doesn’t pander to any particular audience, so that’s what I tried to create. I feel like I should add that this music and these lyrics came to me completely effortlessly – like it was desperately trying to escape from inside of me. There was really no thought to any of it all, just this primal impulse to write and record it.

Dead Rhetoric: The title, and cover art is profound. Are there any lyrical themes running through the EP?

Kaminsky: Yeah generally speaking the lyrical focus of the EP is self-healing, self-discovery, catharsis, and acceptance. The record is wholly written about an excruciating and years-long spiritual experience that nearly killed me by the end of it, and writing about it to such an extreme gave me a beautiful sense of closure. Long story short, I spent a few years working with and under a spiritual guide as an energetic channel and healer, who gradually took advantage of me in a way I can only describe as “spiritual extortion”. Each song literally describes what went down over those years in their own way, casting four different hues of light on my experience in a way that both carries specific meaning to me and broad meaning in a metaphorical sense. The album title itself is a metaphor for my own self-sabotage; stoically carrying on a way of life that you know to be damaging and unhealthy is akin to riding an immolated horse, and that’s something I feel many people can probably relate to on either a physical or spiritual level.

Dead Rhetoric: You do a great job of balancing technical playing with melodic, but simple leads. Are you sometimes worried about pushing the technical envelope too much?

Kaminsky: I never really think about how my music will come off, whether that’s too technical or too melodic, or whatever. It just doesn’t ever enter into my mind, heart, or soul. I feel that if I stay true to myself and allow my body to be the vessel for my soul’s music, I can’t go wrong. It’s really the same as my answer to the genre classification question, in that it’s just something I never want to think about and write as a result of. As both a music fan and writer, I love all combinations of technical musicianship and melody but I’ve never thought they should be exclusive entities. A lot of my music ends up being very visceral and technical because it’s written from a place of extreme passion deep inside me, and that’s just how it translates into sound.

Dead Rhetoric: Is Stone Healer your lone priority at the moment?

Kaminsky: At present I’m working on writing and recording a heavy rock and roll record, which is actually occupying most of my creative energy. Think the most “rock ‘n roll” parts of the Horses EP accompanied by jazzy, fucking awesome female lead vocals. I’m super stoked on the rock thing, but I’m also sitting on about 20 minutes of material for a full Stone Healer record that I plan to build on over the next year or so.

Dead Rhetoric: Any thoughts to putting together a full band?

Kaminsky: Yeah I’m actively working on assembling a full band! Well, a full live lineup at least. My intention was always to take Stone Healer on the road and tour somewhat extensively, but that won’t happen just on my lonesome! I have a few prospects at the time being, and I hope by summer 2016 to have a lineup and a concrete tour plan in place. Performing this music is just as important to me as having recorded it, and I honestly wish I could have unveiled the music both via recording and live performance at the same time. So, if anyone reading this might be interested in performing these Stone Healer songs live with me, please get in touch by email or through social media!

Kaminsky: As I mentioned above, another (longer) record is well in the works and so are lots of performances – but neither are my personal top priority at the moment. Between a few records I’m recording and mixing in the early part of 2016 with other groups and my rock record, I’m letting the hooks I already have in the water with Stone Healer sit for a bit. I’m very excited about the direction of the newest SH music, some of which was actually written at the time of the Horses songs but have a distinctly different vibe.