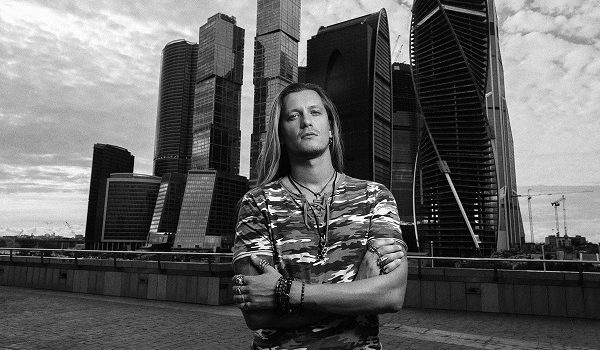 As echoed throughout this interview, we don’t get a great deal of Russian metal. Sure, Arkona is currently making the rounds, but beyond them, it’s a mixed bag. One act who figures to make headway is Starsoup, the product of multi-instrumentalist Alexey Markov (also of Distant Sun). Virtually defying categorization, Starsoup is almost emblematic of their name — a veritable “soup” or even “stew” of broad sounds, most notably, progressive and melodic metal. On their sophomore Castles in the Sand (Metalism), Markov puts on an impressive display of crisp, warm songwriting, the type that should easily appear to the always hard-to-impress Dream Theater brigade. With that in mind, we sent some Q’s over to Markov. Here’s how he responded:

Dead Rhetoric: We don’t come across a great deal of Russian progressive metal bands. How and when did you start to develop your taste in this style of metal?

Alexey Markov: I once was a huge fan of early Dream Theater. I still love the first few albums and can’t listen to the few latest ones. Then I got into Angra — mighty Kiko now in Megadeth, I’m really happy for him! Then Queensryche, Savatage, and a little bit of Pain of Salvation. I’ve always loved melody, intricacy, and emotion, so it’s only natural I’m into prog.

Dead Rhetoric: Russia has had its share of quality bands, but none have ever quite broken through to major international success. Why do you think that is?

Markov: I guess the most popular Russian band was once Gorky Park, which was a fine band with some great songs, but they split or probably ran out of money. Currently, we have Arkona touring all over the world. Both bands somehow emphasize Russian culture in their creation. We have a few very popular heavy/power metal bands that sing in Russian, but nobody needs them abroad. I guess overall, our market didn’t have enough time to emerge, but it’s changing. Slowly.

Dead Rhetoric: How would you currently describe the Russian metal scene?

Markov: A lot of bands that sing in Russian, a few underground bands that sing in English. I think some of our extreme acts do travel to Europe once in a while. But, there are so many big shows going on every week in Moscow that the local audience is kind of tired. It’s hard to attract them to small clubs after they’ve seen everything. So, there’s two sides to every story: a big market for top-tier bands and a hard one for local bands.

Dead Rhetoric: As for Starsoup, what was the motivation behind starting the project?

Markov: It’s simple – I was in a band that split, but we had a few good songs that I really wanted to record. But, when I was in the studio, new tracks started to appear – so I couldn’t stop and made a full album. This second album is just a logical continuation of this.

Dead Rhetoric: Is it easy to separate the worlds of Distant Sun and Starsoup?

Markov: Yes, it’s easy. Distant Sun doesn’t employ keyboards and only plays metal. Starsoup is different, we play all kinds of stuff. But I might use a text that I wrote for Distant Sun in a Starsoup song – if it fits better.

Dead Rhetoric: Your sound is very difficult to describe – it’s a melting pot, basically. Do you have a “nothing is off-limits” approach when songwriting?

Markov: I think I did have something in mind when I was recording the first album, but this one, Castles of Sand, was indeed written with no limits in mind – I just put everything I wanted in there. Maybe there’s too little metal at the moment, but it can change any day.

Dead Rhetoric: You are listed as the band’s primary member, but do you have anyone helping on additional instruments?

Markov: In Starsoup, no. There are no permanent members, and I’m even open to other composers if I like their songs. So, I’m more like a producer here. I have a lot of musician friends and I can choose which ones to invite to record a song or two. After two albums a lot of people want to take part in the next record.

Dead Rhetoric: Thematically, what does Castles of Sand represent?

Markov: It’s a great question and it’s hard to answer. I’d say it represents nostalgic emotions of those who like the 90’s music more than the 00s, but with a powerful modern sound. It’s full of different images (literally, too) and I wanted to make a listener feel a lot of various emotions throughout this album.

Dead Rhetoric: Do you have any long-range goals for Starsoup?

Markov: I want Starsoup songs to be heard, I really think they deserve a wider audience as there’s something for anybody. A cool thing would be to get to a big movie soundtrack, that would be awesome.

Markov: A few videos, plus some interesting cover versions. I have a great tour planned with another project I’m in – called Garage Dayz, which is a Metallica S&M tribute with symphonic orchestra. Creatively, I’ll be concentrating on the Distant Sun songs.