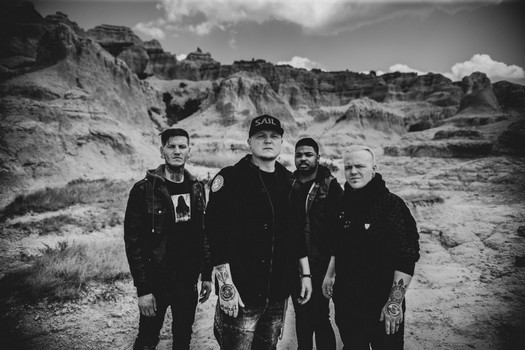 Iowa’s Saul is a story about being an underdog and working your way up the ranks. Parading around in the underground, but taking consistent steps forward in an attempt to reach that larger audience. At the brink of caving in, the band released their Aeons EP in 2018 and finally got the break they were looking for when “Brother” became a radio hit. The story was written then for the independent act. Finally getting some commercial success, they signed with Spinefarm Records to produce their full-length debut, Rise as Equals (out this Friday). They collaborated with some major players, such as Disturbed’s David Draiman, and the result stands for itself. A consistently enjoyable hard rock effort that has some deserved buzz behind it. We spoke with vocalist Blake Bedsaul about all of these things, as well as being in a band with his brother, the concept of family with the band, and plenty more below.

Dead Rhetoric: How do you describe the sound of Saul to someone who may not have heard the band before?

Blake Bedsaul: One thing we do label ourselves as is progressive mainstream. We definitely try to put the influences of Tool, djent, and mainstream radio together. That’s definitely the vein we try to stay in.

Dead Rhetoric: What are you proud of accomplishing with Rise as Equals as your full-length debut?

Bedsaul: We definitely left everything on the table with this one – that’s how we feel about it. There’s no filler songs. It’s a 14 track album, and we wrote every single song like it was going to be the next single or the next big song. We didn’t hold back. We put everything we had into each one of them. I think we are really proud of that and really diving in and insuring that each song was exactly what we wanted to say.

Dead Rhetoric: You don’t see that with a lot of bands in the hard rock area – there’s usually a clear single. I didn’t get that from you guys. It did seem like everything had a nice, consistent quality to it.

Bedsaul: We definitely tried. We didn’t want that one song that stands out and have the rest of the album just there. We wanted each track to have its own voice and stand out in its own right.

Dead Rhetoric: Could you discuss some of the lyrical approach with the band?

Bedsaul: It’s definitely from our own eyes and experiences but it’s the same things that everybody feels across the world: loss, love, fears. It’s everything that we have experienced within the last year. We try to write more personally, and be involved in what’s going on. I think people can really use that idea and see how it transpires in their personal lives. It’s not that we necessarily have to do it that way, it came out naturally – like, ‘how are you feeling?’ and just write it like that.

Dead Rhetoric: How’d you end up signing with Spinefarm?

Bedsaul: in 2018, Zach [Bedsaul] had this conversation that we had been doing this for a while. The Aeons EP was going to be our last hurrah. If it didn’t pan out or have success we were going to be done. It would be the last EP we put out, and we’d just stay with our regular full-time jobs. But “Brother” really took off and that put us in a spot where we could not only continue, but we could focus on it even more full-time. That led us to being spun all over the country on radio, and Spinefarm caught wind of it, contacted us, and flew us out to New York. We had a couple other labels interested but after meeting these guys and seeing how family oriented and ready for success they were, we knew that was the route we wanted to go.

Dead Rhetoric: How was the experience working with David Draiman? I know that was something that came up during quarantine.

Bedsaul: David is a legend. It was great working with him. He’s a very down to earth guy. It was great to see that too. A guy with huge success, like Disturbed has had, you never really know how they are going to be. Maybe a little jaded or lackluster…like already been there and done that. He was not like that at all. He was great to work with and had a great personality. He’s great at what he does. Zach and I came in with a couple ideas, but he was like a sculptor and took our ideas and put them into what he felt they should be. It all panned out with “King of Misery.” It’s a great song. Unfortunately we had to do it all over Skype, but it was fantastic.

Dead Rhetoric: You also worked with some other notable names on the tracks, was it surreal moving from an independent act to working with bigger names in the business?

Bedsaul: Absolutely! Being in a band and doing it independently, you have these dreams and aspirations to meet with people or work on something together, or tour with some band. To have all of these guys say they were fans and that they wanted to be a part of the new record and part of our first full-length – to help shape and bring our career to life…it was phenomenal. Working with guys like Eric Ron and Morgan Rose, and David Draiman – to have them say that they were fans of us was mind-blowing, especially coming in as small town Iowa dudes just trying to scrape by. It was surreal.

Dead Rhetoric: What are some of the challenges have you faced in trying to make the band successful?

Bedsaul: For any independent artist, it’s the years of grinding. Touring and then working your full 9 to 5, and spending time doing the weekend warrior stuff and then coming back into to work. It’s just a long grind. If you’ve been doing it five or so years, it starts to wear on you. You start to question yourself. That was our defining moment. That was that last hurrah where we acknowledged that if we didn’t see it, it was time to call it what it was. It worked out in our favor.

Dead Rhetoric: How does your relationship as brothers [with Zach] impact the band?

Bedsaul: It’s great! I have never been in a band with anyone other than Zach. He’s very fortunate in that aspect [laughs]. I have never been with anyone else, but he’s my best friend, he’s my brother, and when it comes to writing music we are always on the same page. If we aren’t we can work it out one way or another. I really wouldn’t want it any other way. I don’t know what it’s like to be in a band with someone who isn’t that close – where it’s just like being friends or a hired-on guy. I don’t know what that would be like, and I don’t want to experience that.

Dead Rhetoric: You mentioned the family feel with Spinefarm too. Could you discuss the concept of family as it then extends to the rest of the band and fans?

Bedsaul: Let me just start off by saying that we call our fans ‘Equals.’ The title of the album is Rise as Equals, the slogan of the band is rise as equals. Family comes first. You gotta take care of number one, and that means your kids/wife/home. That is one thing that we focus on. The fans being Equals, and they are family. They are just as important as the band is. They prove it every time we say things like, “We just hit 29 on the charts, let’s get this higher.” Everyone is going in and doing it for a purpose. It feels like a family. It’s huge. We try to put that out there that everyone out there is family and are important to us. We will do things for you. We try to create family vibes for sure.

Dead Rhetoric: What does hard rock and music mean to you personally?

Bedsaul: It’s my go-to. I don’t know if I could really write any other style of music. I think the songs have more depth and character to them. You get into a pop situation, where you talk about ‘wop’ or whatever. I don’t care about that – it doesn’t mean anything. I can go home, and I see that stuff every day. I don’t want to sing about drinking or partying. I want real life experience. That’s what you get from hard rock and metal. That’s what we are trying to bring, with a positive vibe. Sometimes you just have to work your butt off and sometimes you have lows and highs. Let’s sing about that. Let’s write about that. It doesn’t always have to have that party vibe to it. I’m not a big fan of that.

Dead Rhetoric: So is the positive outlook really important?

Dead Rhetoric: What are some goals that you have for the band?

Bedsaul: The main goal is to get back onto the road. Releasing the record October 23, we are hoping things kick back off early in 2021 and we can get out on the road and support this record. We want to get out there and see everyone who is buying it, and want to support us on stage. That’s our main goal for next year.

Dead Rhetoric: Do you have any plans set for 2021?

Bedsaul: Just getting out there on tour. There’s a lot of things we want to do as far as festivals – there’s a lot we missed out on this year. There was going to be a rock revolution and rock was going to be bigger than life in 2020. There was the Disturbed 20 year anniversary and everyone getting out there. We had some big tours lined up that got cancelled. I’m really hoping that rock revolution happens in 2021. I feel like it is on the verge.