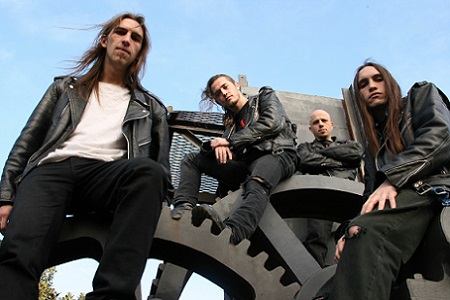 Setting their sights for years on venturing to American shores for some live shows, Australia’s Darker Half took the opportunity in June/ July of this year to finally appear on these shores. Stringing together a series of dates on a DIY type tour, including an opening slot for Grim Reaper in NYC as well as an appearance at this year’s Warriors of Metal Festival in Columbus, Ohio, I got the chance to take in the band’s thunderous live energy during a fill in date at Cherry Street Station in Wallingford, CT.

The quartet possess all the qualities you could want in a power metal band, minus a lot of the bombast that can weaken some of these acts. The band prefer twin guitar workouts, solid hooks throughout, choruses that audiences chant and champion, and an all for one group mantra that made acts like Iron Maiden, Jag Panzer, and Helloween fan favorites forever. Here is guitarist/vocalist Vo Simpson giving a little more insight into Darker Half, and be sure to support their output, as they are the real deal.

Dead Rhetoric: Tell us about the formation of Darker Half – when did it start, have there been any significant lineup changes and how much experience each musician has within their respective instruments and/or bands through the years?

Vo Simpson: I formed Darker Half in high school after being shown a mix CD of old Metallica songs by one of my mates. I was playing mainly bass at the time and switched to guitar as a main instrument when forming the band, the original line-up was made up of friends from high school who basically lost interest in metal after we finished school. My brother Dom (drums) was originally brought into the band as a guitarist, but when we lost our drummer after recording our first album, he decided he’s rather play drums in the band (his first instrument), so we recruited Brad Dickson, who we were going to university with at the time on guitar. We’ve all got between 10-15 years on our respective instruments, and Dom and I are fairly competent on others too. I kinda lucked out being able to sing, as that wasn’t really part of the plan, but I’ve gotten really into it these days and work a lot keeping it in shape.

Dead Rhetoric: Your style seems to be a great balance between American and European power metal, with nuances of thrash thrown in as well. Do you find this an accurate description of Darker Half, and where do you see yourself stylistically – are there particular things you make sure to include in all of your songs?

Simpson: I guess it’s a pretty accurate description, I like a lot of different music and try include bits and pieces of everything where I can, but am also conscious of the need to have a style/sound of our own. I think Australian metal bands in general have a more even mix of US and European influences due to us being so far away from both continents and not having any particular loyalty to either.

Dead Rhetoric: Darker Half recently self-released a third album, Never Surrender, which consists of new tracks as well as re-recordings of older material featured on your first two albums. Tell us more about the recording sessions, as you’ve really stepped up your game in all facets between the artwork, liner notes, production values. Is this the main reason why you decided to re-record some of the older material versus putting out an entirely new record?

Simpson: Pretty much, we were never 100% happy with either of our first two albums, for a whole bunch of different reasons, now they’ve both sold out of pressing, we didn’t really want to re-press them, but felt a lot of the songs themselves were still very strong and didn’t deserve to be thrown out completely. So we thought the best way to introduce ourselves globally was to record the songs that we felt were strongest, while keeping in mind we still needed to write new material as well, especially for our Australian fans who have had the first two records. I think the writing too though has taken a big step up on this album, hopefully others will agree.

Dead Rhetoric: You reside in Sydney, and are over a 12-hour drive away from the biggest city in Australia, Melbourne. How do you view the metal scene in your home country? There seems to be a lot of talented traditional, power, progressive metal acts – as well as a love for extreme death/black metal?

Simpson: Yea, we live in Sydney, but Sydney is by far the biggest city in Australia, Melbourne has an incredible music scene though, probably better for metal realistically as well, there’s definitely more melodic metal in Melbourne. Our scene is a weird one, we don’t have anywhere near the population of the US or Europe, but the fans are incredibly full on, and a lot of the international bands we’ve toured with have been genuinely surprised by how strong our scene actually is considering the numbers/distance between major cities. We really don’t have the same kind of touring circuits you can get over here (US) or Europe. Even the biggest bands will generally only do 5 shows max on an Australian tour, and many still skip Perth and Adelaide due to the exorbitant cost of getting to those cities by comparison to the East coast (Sydney, Brisbane and Melbourne).

Dead Rhetoric: This is your first tour of North America, including an appearance at the Warriors of Metal festival. What are your impressions of the shows, fan response, and overall tour stories/ sightseeing adventures (as you parade around in the Scooby Doo tour van)?

Simpson: So far it’s been going great, we’ve been having a killer time and met a lot of great bands and people. The response has been quite a shock to us as well. I really wasn’t expecting to have crowds knowing the words to most of the songs, especially on our first trip over here, so we’re pretty blown away by the response we’ve been getting if I’m honest. We’ve definitely had a few interesting moments, breaking down in NC for three days was something we weren’t really planning for, but we managed to make it work and get down to our show in Atlanta, we’ve never cancelled a show before and don’t intend to start now.

Dead Rhetoric: What are your plans and goals for Darker Half over the next 12-18 months?

Simpson: We’re gonna head back to Australia in about a month and release Never Surrender there along with a national tour. Then we’ll be writing for the next album and planning our return trip to the US next year along with hopefully our first European tour as well, so we’re pretty busy. Our first Australian date is like three days after we get home in Melbourne,  so we’re not wasting any time! 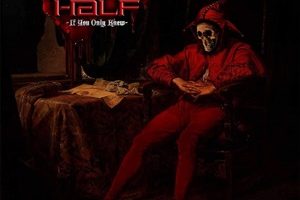