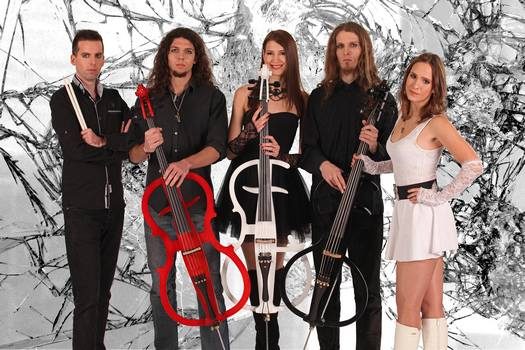 What defines something as being ‘metal?’ Is it the guitars, the vocals, drumming? Or is it something more? If you ask most aficionados about it, they are likely to view it as the later – there’s something innate about a band that defines them as being metal. Even if, ultimately, a classification isn’t really required. Why bring all this up? Well, the band in question is Hungary’s Leecher, who uses cellos in place of guitars and bass. While one may be tempted to think about Apocalyptica, a quick listen to their 2016 debut Sightless will no doubt prove that the band is heading in a different direction with their material.

A feeling similar to some symphonic metal acts, the cello usage gives them a unique vibe that’s more grandiose and dark. Sightless contains all of the power you would expect from a metal album, but with a refreshingly distinctive take at the core of it all. Vocalist Anett and cellist Kutor were gracious enough to fill us in on some of the goings-on with Leecher since Sightless’ release (and their current plans), as well as their perspective on cello use and doing outside-of-the-box remixes of songs.

Dead Rhetoric: Could you take a few moments and give us some insight about the band’s beginnings?

Kutor: The idea for a band had been around for a long time. Abel and Dave were classmates in primary school and there they already talked about wanting to play in a band sometime. Then in high school (where Abel and I were classmates) we started to take this idea more seriously, and after a few more years, we had a more-or-less stable concept of what we wanted. Leecher’s official first show was in 2008 (then with two cellos and a keyboard), and we mostly played covers of songs we really liked. Apocalyptica was a huge part of this of course, but we had some songs that were pretty interesting to do with cellos, such as from the band The Birthday Massacre. After a while we started to write our own music, and now covers are just an addition to this. Then, as many fresh bands do, we went through a lot of lineup changes, with the girls finally arriving in 2012.

Dead Rhetoric: How would you describe the sound of Leecher?

Anett: Leecher’s sound is pretty much like a classic metal band with the difference that guitars are replaced by cellos, resulting in a peculiar sound. The guitar solos are replaced entirely by cello solos too, this classic sound mixed with a metal band’s sound gives an interesting and unique flavor to the music. To this, an orchestra is added, clean female vocals and, in some cases, harsh vocals.

Dead Rhetoric: It’s been 2 years since Sightless was released. How would you gauge the overall reaction to it?

Anett: In Hungary the album was released as a supplement to the Metal Hammer newspaper, so it reached quite a few people in this country. We received a lot of feedback, but more from abroad (most of which were positive), which led us to believe that maybe Hungarian lyrics would bring it closer to our domestic audience.

Dead Rhetoric: It was announced that you are recently back up to three cellos in the band. What possibilities does this offer you in terms of the music?

Kutor: Our music has always been meant to be played with three cellos; unfortunately after Matyi had to leave (no hard feelings, it was work-related), it took a lot of time to find a replacement for him. The cellos basically have the rules of a bass, a rhythm and a solo guitar, but we can (and do) switch any of these to a natural cello sound have more of it when needed, which gives a lot of flexibility to our live sound.

Dead Rhetoric: Are you currently writing any new material? If so, what’s the overall feeling of the music?

Kutor: I’m always writing new material — only some of it doesn’t make it into Leecher. Songs are usually born out of ideas, and they are mostly about human relations or “big picture” stuff about the world (see “Slaves to a Dream” or “All the Stars”). Many of these are more-or-less based on personal experiences, but we try to write it in a way that makes it more like a general thing, so that people can identify with the lyrics.

As for the music, my style is a bit more riff-oriented and… evil? (I can’t find a better word — I did “Slaves to a Dream” and “The Devil in the Details,” just to give you an idea) than Abel’s, but before recording, we’ll go through all the songs to make sure the sound is consistent all over the album.

Writing a follow-up album is a bit hard, because you need do introduce something new, while also not straying too far from what you’ve established earlier. We’ve been thinking about some things to further spice up the music with, but let’s keep that a secret!

Dead Rhetoric: What advantages do you think focusing on the cello as an instrument gives you as a band, compared to other symphonic metal acts?

Kutor: Well, first of all, even with Apocalyptica or 2Cellos around, it’s still kind of a unique thing to use the cello as a non-solo instrument. Also it has a distinct sound which you can recognize when you listen to the album — a lot of work went into mixing it so that you can still hear it’s not a guitar.

Also, as I said, we can switch to natural cello sound live, so we can have three cellos play, which isn’t something you could do in a guitar-based band.

Dead Rhetoric: You did a cool “1930s” version of “Eclipse” last year. Would you like to further explore other sounds with your tracks, for fun?

Kutor: I do this kind of stuff all the time. I did an electro-rock version of “Encore,” a dubstep version of “Damnation,” an ‘80s synth-pop version of “Eclipse,” and also transposed some of the songs to major scales. But this isn’t production-grade music by any means, it’s just for fun. If something sounds very good, we may do some additional work on it to share it with people.

Dead Rhetoric: For your fans in your home country of Hungary, you play with the lyrics in Hungarian. Is this an added bonus for those that have followed the band?

Kutor: Anett did a translation for “Fading” back in 2016, and people liked it very much. We’ve been asked if there will be more Hungarian versions. So we thought, why not? It helps to connect more with the audience and brings everyone closer.

Translating songs is an interesting challenge, because, rather than doing a literal translation, we write a completely new lyric that keeps the original idea.

Dead Rhetoric: You’ll be performing at the Female Metal Event in October. Do you have any other live plans coming up?

Anett: At the beginning of February, we’ll be supporting Arkona for three shows (Zagreb, Novi Sad and Cluj-Napoca); we also have a Romanian tour coming up in May. In the meantime, other shows are being arranged.

Dead Rhetoric: What goals would you like to see the band accomplish, either short-term (6 months) or long-term (say, 5 years)?

Anett: In the next six months, or rather in the next year, we will get an insight to the world of touring :). We haven’t got a lot of experience on this, so we are very curious about how things will happen. We can conclude from the reception of the concerts …

… to what would happen next! I think that within five years maybe we can achieve having a fan base in the surrounding countries, so whenever we go, they would be there. We hope that we will release a third album in the meantime.

Dead Rhetoric: What are your remaining plans for 2018?

Anett: I think, in 2018, we are going to focus on the concerts and the tours. We’ve also started to write new songs and fortunately we are full of ideas, but we will start recording only by the end of the year.