Insomnium – The Sun Won’t Go Down 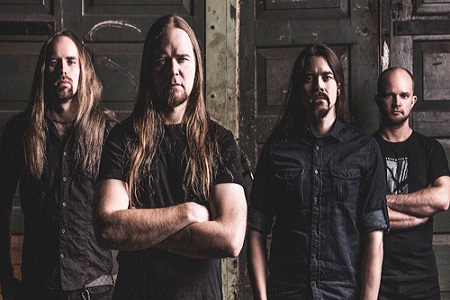 Since their debut in 2002, no Finnish band has done a better job of upholding the country’s Amorphis-on-Sentenced tradition better than Insomnium, something this scribe has relayed here, here, here, and here. (Repetition, anyone?) The band’s melancholic melodic death metal sound has congealed and solidified to the point where Insomnium is now a full-fledged international force, as evidenced by the strong chart positions for their new Shadows of the Dying Sun full-length. It’s been a steady build, though, with the band incrementally growing its fanbase with each successive album. Their 2011 Century Media debut One for Sorrow can be seen as the launch point; Shadows of the Dying Sun is at the present time their apex…but hopefully not plateau.

The three years that elapsed from One for Sorrow and Shadows has seen some changes afoot in the Insomnium camp, as well as an unprecedented run of touring, which according to bassist/vocalist Niilo Sevänen has made the members’ personal lives “Progressively more difficult and time-consuming.” But, there’s no substitute for the tremendous strides the band has made, along with the tours under their belts. The band has never been this popular and visible, based on the combination of One For Sorrow (“Regain the Fire” is a song for the ages), and the promotional shot-in-the-arm courtesy of Century Media.

“Ah, what a pack of great tours we did,” begins Sevänen, when asked to reflect upon the album cycle for One for Sorrow. “China and Japan were the most exotic; the North American tour with Epica was simply superb, then there’s the several great European tours with Paradise Lost, Moonspell, Children of Bodom. And of course, our own headliner tour. Plus many great festivals like Summer Breeze, Wacken and Hellfest. It’s been fun.”

The primary change for Insomnium is the insertion of Omnium Gatherum lead guitarist Markus Vanhala, who is no stranger to these pages. After the 2012 departure of long-time guitarist Ville Vanni, Vanhala was the only man for the job, both on a musical and personality scale.

“Awesome guy, magical guitarist,” enthuses Sevänen. “He has composed three songs on the album and has taken already a big role in Insomnium. He brought a lot of talent, vision and enthusiasm to the band. It’s kind of a fresh start for us really. First time we have a world-class guitarist in our ranks and that brings a new dimension to the live shows as well!”

Vanhala’s contributions are evident across the particularly the clean-channel guitar solo on “While We Sleep” (which Vanhala told this scribe was his Don Henley “Boys of Summer” moment), the up-tempo “Revelation,” the climatic “The River,” which he co-wrote with Sevänen. Naturally, Sevänen can easily paint the picture of his beneficial pairing. “He is a great composer and it’s really a pleasure to work with him when creating the new songs. I have been so goddamn busy in my personal life that it’s great to have a new guy in the band who can take a big part of the burden. The songs he did on the new album are just awesome and they fit the Insomnium style and vibe really well.

“Ville’s departure was not easy for any of us, he continues. “He is a great friend and it’s sad that he can’t travel with this bunch anymore. On the other hand, Markus was a good friend of us already back then so it was quite easy for him to jump in. It’s never easy to join a band where other guys have been together over ten years, but Markus has adapted really well. Feels like he has been in the band for ages now!”

In contrast to those who came before them, Insomnium’s increasing reliance on clean vocals has become an afterthought, mainly because they fit so well within the band’s sound. Unlike the awkward whine of Anders Friden, or the syrupy Goth tone of Mikael Stanne, or even the occasionally over-blown clean chorus selections from Speed Strid, Insomnium’s clean vocals serve the song, and fit comfortably among the enchanted sounds of melancholy.

“I think we now master the gentle art of arranging the clean vocal parts amidst the death metal,” relays Sevänen. “Our engineer and producer Teemu Aalto can take a lot of credit for this also. He is also singing on the album.”

Switching gears, in true Finnish fashion, Sevänen is not impressed, but rather humbled by the band’s accomplishments. Formed in 1997 in the small town of Joensuu, Insomnium weren’t deterred by the lack of proximity to Helsinki, eventually getting noticed by England’s Candlelight Records by way of their Under the Moonlit Waves demo. Their subsequent In the Halls of Awaiting 2002 debut, and 2004 Since the Day It All Came Down follow-up helped the band exceed their basic goals, even if the band was a bit green at the time. “We were just concentrating on learning to play and compose,” admits Sevänen. “The biggest dream was to have a deal with some proper label. In many ways these 17 years have been unbelievable.”

Sevänen then proceeded to provide us with the four turning points of the band’s career:

1) Signing to Candlelight.
2) Above the Weeping World becoming a small hit and then the start of touring outside Finland.
3) Signing to Century Media.
4) Markus Vanhala joining the band.

The ensuing tour cycle for Shadows of the Dying Sun should take up an estimated two years for the band, much like the cycle did for One for Sorrow. But for now, the success of the new album is food for thought, especially for the sake of perspective.

“I personally think that this one and the three previous albums are on the same level more or less,”  finishes Sevänen.  It’s very hard to pick a clear favorite. And of course, I love our two first albums and the feeling they have, but you can also hear that we were young and inexperienced.”