Six months ago Stitched Up Heart did a short tour with Kaleido (which also hit NJ’s Dingbatz) and the pair of bands hit it off so well that they’ve quickly come back through together again. This time leading up to Stitched Up Heart’s tour run as support for Steel Panther, this stint of shows allowed fans to catch a few more songs in a more intimate setting. Given that May’s show fell on a weeknight, I caught some hell from my children about them not being able to attend with me – so this time all three of us headed down to New Jersey for the evening.

With my boys’ growing interest in live music and having caught Kaleido twice last month, it was a no-brainer to have them experience their first VIP with the band before the show. Admittedly, things like this can be a bit risky – VIP/meet & greets can be highly mechanized, with fans shelling out top dollar to stand in a line, do a quick handshake and maybe snap a picture/say hello to the band in question. It feels artificial, but perhaps that’s just my personal opinion.

Nonetheless, there would be nothing of the sort with Kaleido – the few of us there entered their touring RV and were treated to a personal, and highly enjoyable experience. The band performed a gorgeous acoustic rendition of “Eating Me Alive,” joked and chatted with all of us, and showed genuine appreciation for us doing the VIP. As it has been in the past with Kaleido, they’ve gone way further than expected to make sure my kids feel special. It’s not something they have to do by any means, but it sure is the icing on the cake in being able to chat with my kids about these things days later. I’m also certain that it is something that will stick with them through the years. 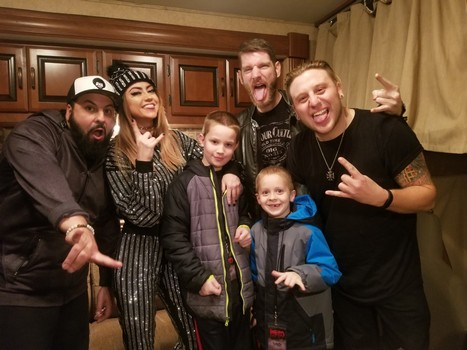 With the VIP experience chewing up a good portion of the opening acts (along with a walk back to the car to drop off some belongings), we are going to jump to Kaleido‘s stage performance. What to say? Having now caught the band four times in the last six months alone, there’s a good reason for this – Kaleido is high-energy, start to finish. Each member brings a ton of passion to the experience, and new guitarist Drew Johnston seems to be an excellent addition, really gelling well with the rest of the band’s persona – not to mention it was nice to see bassist Cody Morales able to focus on the bass and deliver some groove (he pulled double duty in shows last month).

The band started off with some older tracks from their Experience album, such as the driving “Die Tryin'” and “Love & War,” bouncy and upbeat “Trouble in Paradise” (with plenty of audience participation in the chorus), and more playful “No More Little Miss Nice Bitch.” Drummer Joey Fava got a new minutes to shine as well, with a drum solo mid-way through the set that offered a nice blend of groove and technical skill without being too showy.

The remainder of their set focused solely on the No Rly…I’m Fine EP that was released this past summer. Drawing out a larger dynamic and a bit of a darker tone, it’s also easy to say that this is the band’s best work to date. The songs touch on some heavier themes with the right amount of uplift and realism worked in – to hear vocalist Christina Chriss give some personal details before playing them live only enhances their appeal. You can really see how personal they are to her in her delivery, it simply radiates to those in the crowd.

These tracks are all also seemingly tailor-made to work in the live setting, and some of the heavier riffing makes it easy for those in the audience to start moving on cuts like “Blood!” or “Eating Me Alive.” Exuding charisma, Chriss near-constantly moved across the stage, smiling and interacting with the crowd and encouraged participation, to which the audience happily reciprocated. Above all else, their set was fun – Kaleido is absolutely infectious in the live setting, and no doubt on the rise as they continue to spread the word to venues across the country.

With a tall order to follow the sheer ball of energy that is Kaleido, Stitched Up Heart was certainly up to the task. A act I’ve caught now nine times in the last three years, they exude that same level of crowd interaction and driven performances. What’s been more interesting is how the band has shifted with their new & upcoming material. It would have been easy to pull a cop-out and deliver Never Alone Part II, but in hearing no less than eight tracks off of Darkness (out March 13, 2020) live, it’s clear they are being true to themselves and going outside the box. Starting out of the gate with “New Skin” and “Warrior,” they showcased some of the added flavors they’ve injected into their sound – continuing with that energetic, hard rock-edge but coating it with some electronics and sprinklings of pop.

Next up was an ‘old’ favorite in “Catch Me When I Fall,” in which vocalist Mixi also picked up a guitar and played alongside guitarist Merritt Goodwin and bassist Randy Mathias, but also managed to still move around the stage during the heavier part with the guitar slung around her shoulder. Guitar or no, Mixi is still a force as frontwoman – an enigmatic presence that is all too happy to interact with the fans and crowd and keep them thoroughly engaged. Outside of “Catch Me When I Fall,” the band went through live mainstays “Finally Free,” “City of Angels,” and the emotional “I Can’t Breathe” with the usual gusto and passion, and even brought back favorite “Monster” towards the end of their set. 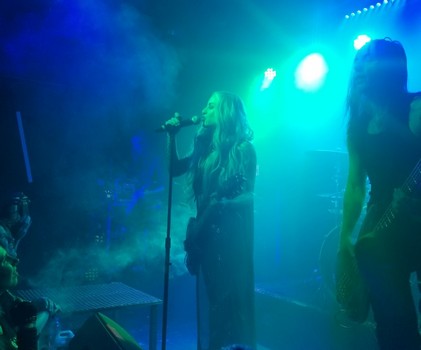 The rest of their set focused on new material, and it’s great to hear how personalized each track feels. There’s not one of them that feel like the other. The band closed on “Crooked Halo,” a track that is very left-field to anything from Never Alone with an ambient electronic tone, but it also feels near ethereal as a closing track – much of the focus leaning towards Mixi but with some cool nuances from James Decker on drums and Mathias’ bass in particular. “Darkness” is a touching track on the lighter side of things, but it suits the band’s mantra just fine.

Perhaps the night’s greatest moment was in that of “Lost,” a track that features Sully Erna of Godsmack singing along with Mixi on the recording, and on this night, Kaleido’s Christina Chriss sung his lines. To see the jovial and electrifying interaction between Mixi and Chriss truly displayed the connection and bond that these two bands have accumulated with two tours together. Perhaps it’s bias, but this version felt even better than the recorded one – you’d be hard pressed to find a face in the crowd that wasn’t smiling at the end of that song. 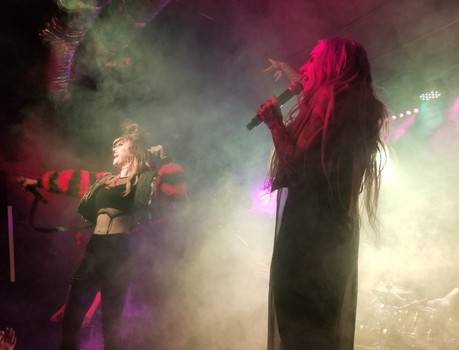 These two bands truly exemplify everything that’s right with the live music scene. They are both down-to-earth and genuine acts that are okay with pushing through the genre boundaries in front of them with passion and ingenuity. One viewing in the live setting is enough to show how much they also care about their fanbase, as well as their desire to give those in the crowd a performance to be remembered.

You can sense the hunger in Kaleido’s performance – they are ready for that final push to get onto larger and larger stages and make it to the next level. And Stitched Up Heart is on the cusp of finally breaking through completely, and based on these live tracks from the upcoming Darkness, hopefully their dedication to providing a different experience will pay off. In either situation, you’d be wise to give each act your full attention as they continue to strive forwards. 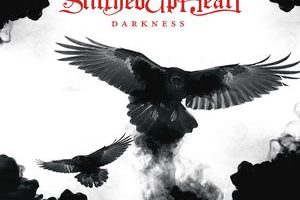