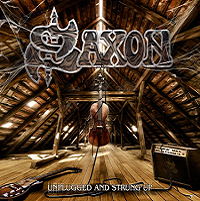 Just look at these cagey veteran bands work it…it’s like, why ever retire? As long as these lads are still functional (read: able to stand), why would they give it up? Since they’re able to defy the laws of time with their recent output, it’s not even much of a question. Saxon very could be the best example of that (don’t forget Maiden, too), with 2013 seeing all sorts of cool accomplishments, like the new Sacrifice platter, a rare North American tour, and now Unplugged and Strung Up, which is the re-working of all sorts of the band’s heralded back catalog jams.

This “makeover” is speared by Andy Sneap, who aside from being able to produce some of the highest quality productions around, has a deft knowledge of NWOBHM, having hitched his wagon to contemporaries Hell. The songs here shine sonically, especially when the band digs back into older cuts like “Stallions of the Highway” and “Just Let Me Rock.” Some orchestral accompaniment on “Red Star Falling” and “Crusader” is a massive boost, like, you could see a full-piece string section beyond the Brits, all huffy and dramatic. They fit like a glove, and it’s not this unnecessary pomp either. That’s not what Saxon is about.

Four acoustic cuts out of the 15 are tacked on at the end, with the ever-reliable Biff letting it fly on “Frozen Rainbow” (the best acoustic jam here) and “Coming Home.” So with that, Saxon has given their brood something new to chew on, and yeah, there is a lot of digest when it comes to Saxon (they’ve released 20 albums since 1980). However, Unplugged and Strung Up should be a nice little treat for the blokes that were kicking around when the originals were starting to pick up steam. Saxon…they just keep on-a-movin’.