As a disclaimer, aside from use of distortion and a few rare harsh vocals in the background on “I, Satan”, there’s nothing ‘metal’ here. That being said, Quaternity is an eccentric, well-thought out, and ultimately rewarding  experience. Songs (or rituals, whatever) based upon the esoteric divinations of an apocalypse-themed cult group from the late 1960s, Sabbath Assembly, no matter any previous output, are not The Devil’s Blood also-rans here, far from it. It takes some time to digest, but Quaternity offers much for listeners willing to explore their offerings.

As noted, given the languid pace and general lack of drive/percussion, most of the songs here aren’t songs in the sense of songs with purpose; they’re instead pieces of music. Based on familiar characters within the Judeo-Christian mythology cast in the light of the belief-structures of The Process Church of Final Judgment (…the aforementioned cult). Details aside (they reside aplenty in anything you’ll read about the band), opening knock-out “Let Us Who Mystically Represent…” is a largely choral work, gorgeous and haunting. “Jehovah on Death” is an acoustic indulgence in the ritualistic and ridiculous. “The Burning Cross of Christ” is almost the most layered work here, musically at least, featuring overlapping layers of synths, acoustic and electric guitar, violin, and who knows what else.

“Lucifer” is perhaps the strangest of the lot, coming across as a peculiar ballad and strangely reminiscent of a spacier take on Leonard Cohen’s “Hallelujah” (…the totally out of place song during Watchmen’s sex scene). The most elaborate affair, however, is 18 and a half minute closer “The Four Horsemen”, which utilizes similar themes from all the previous tracks, bits of spoken word through the reciting of bible verses, and a somewhat triumphant end that wouldn’t be out of place in a western film.

Ultimately if it sounds ridiculous here on paper, believe that it is. Initial thoughts were a mix of befuddlement and glee and as time has gone by and listens piled up, both have continued to resonate. This isn’t for everyone, least of all within the metal world or especially within the fickle crowds that have love for the occult-rock scene. For those willing to brave these wilds, however, there are many riches to find. The promised land is almost upon us! 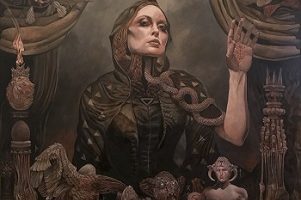