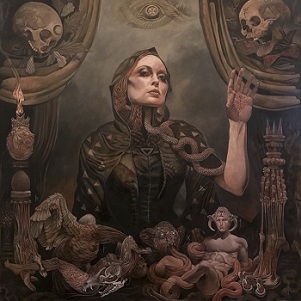 Anything involving Gorguts and Dysrhythmia guitarist Kevin Hufnagel is assured to be weird or obtuse. That’s just what the guy does. Doing it in the frame of technical death metal is one thing; laying it down in a doom-filled outfit like Sabbath Assembly is something entirely different. The band’s 2015 self-titled foray was largely engaging, primarily due to singer Jamie Myers’s bewitching vocals. On Rites of Passage, there’s a little more progressive expansion going on, which to our previous point, ties in with the type of guitarist Hufnagel is. It’s not every day we get to hear such diminished and warped chord shapes in the framework of female-fronted, vintage-inspired doom.

Myers, whose short stint in Hammers of Misfortune is still talked about (probably because she was so good on 2006’s The Locust Years), is at the heart of the matter. She’s prone to vocal pile-ons, occasionally not knowing when to ease up on the pedal. But then again, it’s her personal and affronting lyrics and chilling vocal lines that provide Sabbath Assembly with a clear identity. She’s at her best on “Does Love Die,” accompanied by Hufnagel’s characteristic guitar work on a haunting, if not lush jam. And while “Twilight of God” and “Seven Sermons to the Dead” offer up a heady dose of proto-metal riffing and a deluge of vocal melodies and spells from Myers, it is “The Bride of Darkness” that most effectively combines Myers’s enchanting rasp with folk-like chord arrangements and some neo-classical playing. As noted, rare when two worlds collide like this.

Rites of Passage doesn’t get a full nod of approval because it may be too ambitious for this type of doom. Without the necessary space and necessary atmospheric swirl, Rites of Passage sometimes feels like more of a semi-good idea bank than a proper platform for Myers and her identifiable vocals. Somewhere down the line Hufnagel and Myers will get this all figured out. It hasn’t quite happened on Rites of Passage, but when it does, look out.