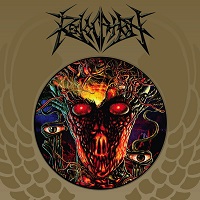 More like prolapse records…as in this album kicks so much ass that it has caused my anus to prolapse.   Sorry.  OK, Boston’s Revocation has dished up a very fine album in their self-titled offering, which is sure to make some waves and some best-of-2013 lists.

This progressive death/thrash four piece (I will add the “progressive” adjective in there) returns with their fourth full-length album and it’s a doozy.  Things start off impressively enough with song “The Hive” which contains a nugget of cool progressive riffage to hint at what’s in store ahead.  As the album progresses, the band’s chops and compelling songwriting really begin to emerge.   By the second track, the muscular “Scattering the Flock,” I knew I was not listening to a run-of-the-mill kind of album.  The killer guitar buildup section on track 3, “Arch Fiend,” had me headbanging in my kitchen and definitely on board for the duration of the ride.

There is something on here for every fan of extreme metal, as it really is a melting pot of styles (well maybe not the kvltists, but they don’t like anything anyway).  I hear lots of influences here from Pantera to Opeth to Van fuckin’ Halen (see “Spastic”).  Death, thrash, tech, progressive, and groove are all well represented.  Revocation can’t be firmly pegged to any one camp, style-wise.  They are genre-benders and not afraid to throw some Major key changes into the mix – something not often heard in the extreme metal world.  Really, this thing is quite eclectic.

Stellar guitar playing is one of the real assets about Revocation and is what sets them apart from other bands.  I would be remiss not to say that all parts of this band are tight as hell, not just the guitar work – the bass playing and drumming (and song composition) are first-class, too.  I’ve always sort of tacked a figurative bonus point onto bands wherein the singer is also an instrument player, and Revocation’s main man David Davidson handles both lead guitar and lead vocals.  This just may be a metal legend in his prime.  Bear witness.