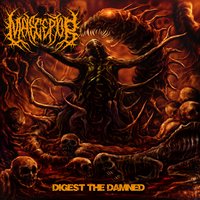 With all of the slamming, brutal death metal around Bandcamp, it takes something a little extra to ensure a click on your band. In the case of the UK’s Maleceptor, it was the somewhat bright and twisted cover that led to a sampling of their debut album, Digest the Damned. An absurdly low “buy it now” discography for all three releases didn’t hurt matters either.

The key words above, brutal and slamming death metal, is really all you need to know about this one. There’s no real tweaks to the formula or innovative additions, but what counts as you spin the album is that it’s some genuine death metal fun. The vocals go through all the necessary variants (though there are some added effects in the song “Not So Virgin Mary”), but are done well. If it doesn’t become directly apparent from the song titles, such as “Liquidized Rectal Cumcrust” (complete with wet fart outro), “Scat Pasty,” and “Kentucky Fried Cunt,” the lyrics reach for that same goofy/disgusting genre staple, even including a few amusing sound clips (which aren’t from the usual sources). The bread and butter is the riffing. Plenty of catchy groove, with a thick production to give everything the needed power. The massive grooves will feel quite at home with fans of Skinless, Dying Fetus, and the like. They manage to pack at least one real winner into each track, which keeps things fresh in the long run.

Perhaps not the most original sound on the planet, but Digest the Damned hits hard and heavy with plenty of groove and brutality. Quite palatable for fans of the genre, with a sound that can be expanded upon with future offerings from the band.