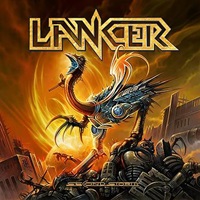 When you think of any rising stars in the power metal field over the past few decades, who comes to mind? I guess depending on your preferred take on the genre, you can safely argue that Lost Horizon made the biggest splash, while Hibria brought back a lot of the Maiden-esque chops people have been longing for in a younger group. Outside of that, a lot of reference points to a majority of newcomers can be charted back to the pumpkin meisters Helloween, which is where we need to start when taking a deep study on Sweden’s Lancer. Second Storm is their second album (shocker, huh?) and follow up to a self-titled effort from 2013 that hung its hat on Helloween/Gamma Ray harmonic hooks, double bass throw downs, and happier melodies that promote warm fuzziness and obvious chanting opportunities.

Second Storm should naturally be a record where Lancer sheds some of their obvious influences and attempts to create their own take on things, and I believe in many segments they achieve more of a traditional/ true stance. Check out the Hammerfall-like gallows march for “Aton”, the background keyboards almost adding a haunting vibe while vocalist Isak Stenvall reaches back before the spirited guitar instrumental break for a lower to bird call note reaching master session for the Michael Kiske or Eduard Hovinga (ex-Elegy) ages. This 9:57 arrangement has everything: two distinct instrumental sections of faster and slower varieties, riff shifts from Per-Owe Solvelius and Fredrik Kelemen that keep the toes tapping, plus plenty of sing-a-long moments, and didn’t feel over bloated. Conversely, opener “Running from the Tyrant” and “Behind the Walls” are conventional mid-tempo and slightly speedier numbers that are textbook German power to the core – big, multi-layered melodies and musically charging just enough to make you break out the Keepers records or even Somewhere Out in Space.

Add in helicopter sound effects for the Maiden-like “Steelbreaker” plus an ostrich mascot for the cover that should exhort chuckles, and I applaud the fact that Lancer decided to go in more of a heavier direction than their debut. The problem is, Lancer aren’t really adding anything new or distinct to separate themselves from much stronger acts in their country like Enforcer or Steelwing, and as such this can be an entertaining homage to the glory of the past but presently needs a little more songwriting forethought to establish the band as a relevant entity on their own.