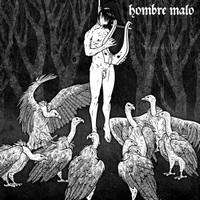 Hombre Malo stands for “bad man” in Spanish. And while this is a Norwegian ensemble utilizing such a cool name (DR could imagine how neat it would sound if a fella with a Scandinavian accent were to make such an utterance), the point is made – these guys are probably bad dudes indeed. But, hopefully law-abiding dudes. Anyway, Hombre Malo plays a frothy brand of hardcore noise metal, swirling somewhere around the recklessness of Converge, Today is the Day, and Unsane, formulating into the combustive show of form that is Persistent Murmur of Words and Wrath, their second full-length.

The sonic front presented by the band is quite daunting. As in, the whole thing is mixed loud; no quiet, and no space. All that is fine in this context, where the band opts to not take the predictable d-beat-a-plenty bait, and instead, engages in some whip-snapping grooves on “Crosses and Marching Feet” and the excellent “Golden Calf,” a song that finds vocalist The Muerto throw in some regularly-sung vocals, as opposed to his normal scream routine. And surprisingly, most of these jams stretch out longer than one would expect, with the brash, punk-infused “Reaching the Shore,” and 10-minute closer “Deathbed Conversion” flaunting Hombre Malo’s sideways riff approach, and post-hardcore sensibilities.

Per the whole “surprisingly long song length” thing, Persistent Murmur of Words and Wrath manages to stretch out beyond 44-minutes, a timespan generally not employed by bands of such devices. All this means is that Hombre Malo, by standards and conventions, are anything but, thus giving Norway another force on the extreme music front.