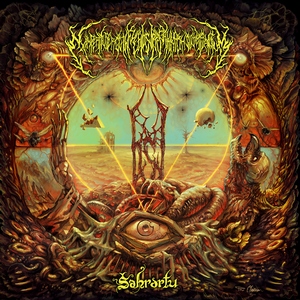 Probably known more in some circles for the excruciatingly long name of the band and indecipherable logo, Eximperitus has made the jump onto a larger label with Willowtip Records providing a home for their second full-length, Sahrartu. Nile fans will likely do some rejoicing for this, but outside those devotees, there isn’t too much to write home about here.

Sahrartu’s Nile comparisons are likely the first thing you’ll notice, and they show no signs of slowing down over the course of the album. That war-like, tank-ish tempo alongside the Egyptian sounds that the band conjure rarely, if ever, take a break. There’s a ton of blastbeats, as one could imagine, and for what it’s worth, those Egyptian sounding riffs and atmosphere are excellently done. It’s just, it sounds a lot like Nile. There’s never a moment where you feel the band has really gone the extra step in finding much more of their own sound. Compounding the problem is the fact that the four songs (outside the intro/outro tracks) are in desperate need of some trimming. A killer, epic Egyptian-themed track can be great, but there’s not a track among these four that wouldn’t have benefitted from leaving some room off on the cutting room floor. That is truly the most frustrating part of this release, as there are some excellent moments in each track, such as the slow, lumbering crawl in “Anhutu” or the early bludgeoning in “Utpada,” but by the time you reach the end of each track, there’s more a feeling of exhaustion from the band drawing things out for too long on each front.

Eximperitus showcases some fancy riff techniques and genuine Egyptian flair on Sahrartu, but much like the band’s full name (Eximperituserqethhzebibšiptugakkathšulweliarzaxułum), it simply drags on for far too long. Sahrartu has its moments, but bloated tracks and frequent Nile-isms make it a tough one to get through in one sitting.