Decimatus – Catalyst for Rage (Self Released) 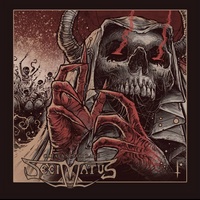 Modern death/thrash is a harder genre to nail than what might be expected. Too much groove and you’ll be labeled ‘core, or play too heavily and you’ll end up sounding more like a death metal band than anything else. That’s not stopping Aussie newcomers Decimatus though, as their debut Catalyst for Rage forebodes some greatness to come.

With a happily modern approach that has its similarities to that of The Haunted, Testament, Lamb of God, or even Slapdash in check, Decimatus pay just the right amount of attention to keeping it both thrashy and groovy. Let’s examine one song for this. “Fate without Faith” carries a breakneck level of riffage to open up, alongside some well-done gang vocals in the chorus. This leads to some heavy chugging riffs later on in the track as well as some tasteful soloing before the track sees its end. There is some variation among the tracks, but the basic formula more or less sticks to this method. It’s a balance that works particularly well for the band, allowing them just enough melody to keep it varied, yet maintaining a heaviness that keeps things squarely metal despite the chugging groove. The melodic solos are a treat as well, emphasizing a more technical side that some like-minded bands tend to ignore. Vocally, much of the album centers around some Peter Dolving-esque shouts, though the clean vocals employed in the closer “Death Sentence (With a Plan)” are a welcome diversion (along with some occasional, previously mentioned, gang vocals).

2015 thrash has started off quite well with Decimatus adding to the early standout Shredhead. As far as Catalyst for Rage goes, Decimatus shows a great deal of precision and flow for such a full-length debut. Certainly the right person is going to come across these guys sooner rather than later and we’ll be seeing them at a much higher level within the metal realm.