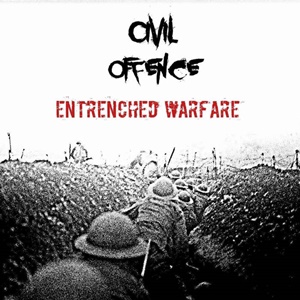 Always on a quest to feature metal bands in all locales, New Zealand is home to Civil Offence – a quartet that started in 2017 and have released their debut EP for Entrenched Warfare. Originating from a side project In Purgatory that is now on hiatus as this band gains full active status, these musicians live for the spirit of 80’s thrash. Featuring many aspects in these four songs that will be familiar to those who love the first generation of Bay Area/East Coast thrash, especially when shout-a-long gang vocals and obvious stop/start tempo transitions became staples of most artists.

Opening the record with military gunfire, “Surrender or Die” sets the stage for an uppity brand of thrash where the speedy riff action and heads down snare/kick activities allow the barking vocals to cement themselves quickly, the cliché ‘eternal suffering/is now your fate’ or ‘something is wrong with civilization’ verse lyrics standing out in Nuclear Assault-like fashion. Tranquil bass parts and a Metallica-like mid-tempo instrumental start (think “Harvester of Sorrow”) gives the almost eight-minute title track an epic atmosphere, rhythm guitarist Mike Benedikter belting out the lyrics in a crossover delivery, occasionally punctuating specific words in a sarcastic punk/hardcore twist as the lead breaks from Scott Reed whir by in frantic, Slayer-esque molds. And as the last two songs follow, it’s clear to hear Civil Offence need to tighten the ship a little bit when it comes to tones and compositions – as there’s a bit of sloppiness that given the type of thrash they display isn’t going to go down as well with ardent followers of the scene. One hopes in the future they’ll get better production values on the drum front and break free from their obvious influences to set some of their own creative measures into place.

Talent is evident within Civil Offence. Now it’s a question of digging deeper, being more critical of separating an average part from a great one and cooking up another set of songs that takes Entrenched Warfare to the next level professionally.