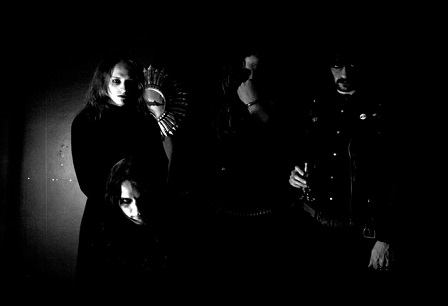 Recently granted a slot on Watain’s fall North American tour, Swedish psych death metal outfit Tribulation have unquestionably benefited from the rapt critical response to their new album, The Formulas of Death. Being that The Formulas has a far more individual and cunning edge than its The Horror predecessor (which was released in 2009), it’s not by coincidence than many are rallying around a band that up until 2013, were relative unknowns in every territory but their Swedish homeland.

The distinct progressive and psychedelic touches that are shuttled through clean guitars, Eastern instrumentation, and thoughtful melodies are for a lack of a better term, otherworldly. They all make numbers like “Vagina Dentata,” “When the Sky is Black With Devils” and “Spell” rife with character, stocked with ideas, with a new quirk at every turn. It’s arguably the year’s thinking man’s death metal album, and one surely to turn Tribulation into something more than a cult act.  And since DR enjoys bands who enjoy a good ‘ole gander outside the box, we saw fit to hit up guitarist Adam Zaars for a round of questions. Here’s how the man responded:

Dead Rhetoric: To start, The Formulas of Death is quite the departure from The Horror. Was there anything you’d like to re-do in regard to The Horror, or was it a necessary album to make?

Adam Zaars: The Horror represents the band as it was 6-7 years ago. It is what it is, and we´re still able to look back at it and say that we did something good and I wouldn’t want to change anything. We don’t think that much about the past, we are looking in other directions. It obviously left a mark in the underground metal scene back then and it took us to wherever we are today, or at least prior to the release of the new album.

Dead Rhetoric: I’m not sure if you’re paying attention to what’s going on in death metal, but there’s a big surge to play death metal ala the early 90s bands, like Entombed and Dismember. Are you conscious of this, and what do you think of bands who do nothing more than re-trace the past?

Zaars: I am conscious of it but I haven’t heard a single band… I think. Apparently nothing that made an impression if I did. People can do whatever the fuck they want and I won’t complain. If they manage to make lasting music from old formulas then that’s cool, but I have a feeling that they don’t. But what the fuck do I know; I haven’t even heard the bands. I can say something about the attitude though; in the long run it most likely won’t lead to any wonders. People entertain themselves with music, they don’t see it as the revolutionary subversive art that it can sometimes be and I don’t think that anyone will be able to produce something that truly gets under the skin of people if they don’t take it from within themselves, thus making it their own music. Who knows?

Dead Rhetoric: Did The Formulas of Death take four years to write, or did “regular life” stuff get in the way?

Zaars: In a way it did, but the last year, or maybe a bit longer, was the most intense period. There are stuff in there that’s about 8-9 years old but the first conscious step towards something new came about in the spring of 2009.

Dead Rhetoric: When putting the songs together for the new album, what was the goal from the onset? Did you have much of an idea the album would be this atmospheric, and captivating?

Zaars: We didn’t actually think about it that much. In a way we wanted it to be more atmospheric and meditative but we didn’t really have the need to talk about it, we just did it and everyone just went along. “It was very natural,” it really was.

Dead Rhetoric: To these ears, the new album is all about progression and thinking outside of the box. Did you draw from any non-metal influences when composing?

Zaars: The album is a lot about doing your own thing, which automatically ends up being outside of the box. We had almost no extreme metal influences; they are already at the foundation of the sound. We took inspiration from anywhere really when puzzling everything together. Swedish folk, American rock, German weirdness, Indian instruments and British heavy metal…and so on. We did what we wanted to and we plan on doing exactly that in the future as well.

Dead Rhetoric: There’s an Eastern influence, albeit, not a super-strong one to some of the songs and melodies. Where did this come from?

Zaars: I like how Swedish folk melodies mix well with Indian instruments, that’s one reason. The other is, I guess, that we present some ideas that have an Indian origin and feel and it was only natural to incorporate some of that into the music. You’re outer appearance often reflect how you feel inside and this is the same thing.

Dead Rhetoric: The album is a long one. Was it one of those instances where you had no idea when putting it together that it will end up being 76 minutes?

Zaars: It was, yes! We decided that we wouldn’t care if the songs ended up being two minutes or 20 minutes, and eventually all of them ended up being quite long. I don’t think that it should matter at all how long a song is, that’s not what’s important for us at least. It seems very superficial to start talking about the length of a song on an album. An album should and could be anything! I mean we won’t play the songs on the radio. If you can’t take it, get out, you know.

Dead Rhetoric: The visual aspect of the band is obviously something that’s important for Tribulation. What do you want people to take away from seeing visuals of the band?

Zaars: They are extensions of the songs in a way. They shouldn’t really be necessary, the music could speak for itself I think, but as it is now we see them as an aid to get through to people. They certainly help in that way.

Dead Rhetoric: The new songs are suitably more involved and atmospheric…will that pose a problem in the live setting?

Zaars: I can be a problem, yes. Sometimes you only get 30 minutes, and if we wanted to we could play two songs in that time. But when we have an hour or more, it isn’t a problem. We certainly manage to play for that long as well and the concerts that we’ve done so far have been really great. You really have a chance to get inside the music, to let it take over.