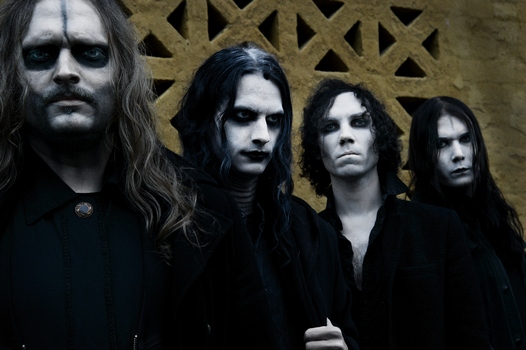 Notably picking up steam with each new release, the unique and evolving sound of Tribulation has no doubt been at least somewhat involved with the band’s lauded approach. A feeling of melancholy permeates the band’s sound, particularly over the last few records. The band’s latest, Where the Gloom Becomes Sound, continues this feeling and continues to tweak it into exciting and powerful experiences that extreme fans should cherish. We spoke with guitarist Adam Zaars to get his thoughts on the material, their new guitarist, as well as his biggest takeaway from being a musician.

Dead Rhetoric: What can you say about Where the Gloom Becomes Sound, as the band’s fifth album?

Adam Zaars: It’s a strange one in certain respects. If I were to compare it to the previous album, it’s much more of a well-rehearsed band that recorded this one. The drummer, Oscar [Leander], had recently joined the band before we recorded Down Below. Since then we had been touring a lot, so I think we sound better together on this one. The songs are in line with what we have been doing on the past two albums. It’s not exactly the same, of course, but the changes aren’t as big as at the beginning of our career.

Dead Rhetoric: What does new guitarist Joseph Tholl bring to the band?

Zaars: He brings his songwriting expertise. We have known Joseph since we were young. Joseph and Johannes [Andersson] were childhood friends, and I started my first band with Joseph when we were thirteen. Since then, we have all been playing with him throughout the years. We know each other and we also know each other as musicians and songwriters. What I am feeling is the most important thing at the moment, since we can’t play live, is songwriting and being creative in that sense. At the moment, I’m really looking forward to seeing where we can take the band with him.

Dead Rhetoric: Tribulation has been active for over 15 years at this point. Do you feel the evolution of the band has been a natural change over time?

Zaars: It has, absolutely. We have always just let the changes happen. I assume that’s why the changes haven’t been as drastic recently. When we did the first album, we were teenagers and still in school. We worshipped extreme metal of all kinds and we still do, to some extent, but you aren’t the same person when you are 17 that you are at 30. We have always let that happen. We have never tried to make another The Horror or The Formulas of Death. We have always let the band and music grow with us as people.

Dead Rhetoric: With the evolution of the band over time, what do you feel defines Tribulation’s music at this point?

Zaars: I don’t think I can put it into words, but there is always a way that we do it. If I am to believe what people tell me, and what I hear over and over, is that they can always hear that it’s a Tribulation track, even if it’s quite different from what they have heard from us in the past. That’s a quality that I admire in other songwriters and musicians. I can mention specifically, our old drummer Jakob [Ljungberg] – his band Second Sun, they have that quality. You can tell in an instant that he has written the song. But what makes that happen is more difficult to explain. I don’t know if I even understand it myself.

Dead Rhetoric: How important is the idea of mood and atmosphere when It comes to Tribulation? For me, it’s one of the first things I think of when I hear the last few Tribulation releases.

Zaars: Absolutely. Apart from wanting to play metal in general, even before the first album, we have had an idea – something that we sum up in the title of the new album, Where the Gloom Becomes Sound, we have always wanted to make music that expresses a certain feeling. Something that we have seen expressed in other forms of entertainment – art, movies, music, or whatever. It’s something that I can’t really state by name. So now we turn to gloom. We have always wanted to express a certain atmosphere, so I guess it’s only natural that it’s creating an atmosphere, so I guess we would have failed [laughs].

Dead Rhetoric: Can you discuss the mythical lyrical approach for the album?

Zaars: It’s always kind of mythical in nature. I know that people have been reading the bio, and there are no lies in the bio, but it almost makes it sound like we are doing something new. But this is what we have been doing most of the time, except for maybe the beginning when we sang about cannibals and zombies [laughs]. For this album, it’s kind of connected to what I was just saying about the music. Trying to connect this sound of gloom –we are trying to do the same with the lyrics. We have always found it more appropriate to use a more mythical language to write about the less mundane aspects of reality. That’s what we are trying to express with the music anyway. We have never been a political band, or one that is trying to get a message out. We just want to express our artistic vision, so we are more apt to use that kind of language.

Both Jonathan and myself had been reading about how the elements have been used and described in both western and Indian viewpoints. We had both been doing that without knowing, and that’s something we have done in the past as well. We have taken advantage of synchronicities like that. It’s not a concept album about the five elements, but that is where we met and we had been writing songs with working titles – one song called ‘Fire,’ more or less and one called ‘water’ so we both ended up there outside of each other, so we went with it.

Dead Rhetoric: Is the visual representation of the band just as important as the sound you are creating?

Zaars: That’s something we felt was very important when we started the band, and something we have been trying to maintain. In a way, Tribulation from the beginning, was both a metal band as well as an art project. We always wanted to make everything ourselves, and more or less, we are still doing that. Everything was important, and everything is still important. The same goes with the live setting for Tribulation. Even though the music might be the most important thing, it should be something more than just listening to music. We have always tried to take advantage of that. That’s why we look the way we do. So it’s definitely important, the aesthetics of the band.

Dead Rhetoric: What’s your biggest takeaway from your time with Tribulation and other bands through the years?

Zaars: Because music can be something very personal, I would probably say trust yourself, trust what you are doing and want to do, and don’t mind what other people are doing and telling you about what you should be doing. If you aren’t looking for a successful in career in music, then I’m sure you can do it. If what you want to do is to create meaningful music, just trust yourself.

Dead Rhetoric: What makes you excited about heavy metal music?

Zaars: The same things as always I think. Good melodies when things aren’t predictable. That sense of artistic integrity and feeling for melody. It doesn’t have to be melody, as I’m not just listening to melodic music either. That’s just what makes a band or album stick with me.

Dead Rhetoric: What is coming up for Tribulation in 2021?

Zaars: We will see I suppose. We have some festivals scheduled for the summer, if they happen. We also have a tour of Europe booked in September/October. If those things don’t happen, I am sure we are going to be doing something else – maybe a live stream or something. We might do that anyway, and I suppose we might be writing some new music as well because of our new guitar player.